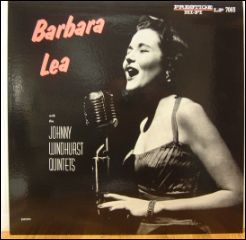 Barbara Ann LeCocq was born into a musical family; her musical heritage is traceable to a great uncle, Alexandre Charles LeCocq — an important nineteenth-century composer of French light opera. Barbara's father changed their surname to Leacock; she shortened it to Lea when she begin working professionally. Barbara grew up in a Detroit suburb and attended the girls-only Kingswood School (which merged in 1984 with the Cranbrook School to become the Cranbrook Kingswood School).

Boston was a hotbed of jazz in the late 40s and early 50s, allowing Lea to sing with major instrumentalists including as Marian McPartland, Bobby Hackett, Vic Dickenson, Frankie Newton, Johnny Windhurst, and George Wein. She worked with small dance bands there before attending Wellesley College on scholarship and majoring in music theory. She also sang in the college choir, worked on the campus radio station and newspaper, and arranged for and conducted the Madrigal Group and brass choir concerts.

Her professional career started upon graduation. Her early recordings for Riverside and Prestige met with immediate critical acclaim and led to her winning the DownBeat International Critics' Poll as the Best New Singer of 1956.[1] She appeared in small clubs in New York, including the renowned Village Vanguard, and throughout the eastern U.S. and Canada, as well as on radio and TV.

She studied acting to improve her stage presence and, with the near-demise of classic pop in the early 60s, turned to the legitimate theatre, performing an impressive list of leading and feature roles in everything from Shakespeare to Sondheim. She moved to the West Coast and received her M.A. in drama at Cal. State-Northridge, then returned to New York and taught speech at the American Academy of Dramatic Arts and acting at Hofstra University.

In the 1970s, with the resurgence of interest in show tunes and popular standards, Lea was literally sought out to appear in the Peabody Award-winning National Public Radio series "American Popular Song with Alec Wilder and Friends". She appeared in two showsone featuring the songs of Willard Robison (10/03/1976) and one featuring songs performed and recorded by Lee Wiley (11/14/1976).[2] This led to two lengthy feature articles in The New Yorker magazine, where Whitney Balliett declared "Barbara Lea has no superior among popular singers" (The New Yorker, May 20, 1985, p. 88), and a renewed singing career.

Lea starred in the JVC, Kool, and Newport Jazz Festivals several times, but her increasing devotion to the songs as written led to concerts of the works of Rodgers and Hart, Arthur Schwartz, Cy Coleman, Cole Porter, Hoagy Carmichael, and the Gershwins, as well as cabaret appearances devoted to Kurt Weill, Jerome Kern, Johnny Mercer, and Yip Harburg.[3]

At the time of her death, more than a dozen of her CDs were available on the Audiophile label, which has a reputation for featuring the best in singers of classic pop, plus reissues of two early LPs on Fantasy/Original Jazz Classics, three recent releases on the European-based label, Challenge, as well as three recent releases on her private label.[4][5]

This article uses material from the article Barbara Lea from the free encyclopedia Wikipedia and it is licensed under the GNU Free Documentation License.

Don't Get Around Much Anymore Tony Bennett & Michael Bublé
Update Required To play the media you will need to either update your browser to a recent version or update your Flash plugin.