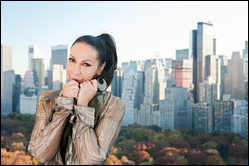 Jennifer Rush (born Heidi Stern, September 28, 1960) is an American singer and songwriter. Rush achieved success during the mid-1980s around the world, with the release of a number of singles and albums including the million-selling single "The Power of Love," which she co-wrote and released in 1984.

Rush was born Heidi Stern in Astoria in Queens, New York and has two older brothers. Her father Maurice Stern is an operatic tenor, voice teacher and sculptor. Her parents divorced and she and her brothers lived with her mother until Rush was a toddler, and then with her father and his second wife in the Upper West Side of Manhattan. Rush studied violin at the Juilliard School, and also learned to play the piano. But she did not enjoy these instruments, and instead, she took to playing the guitar in private.[2] When Rush was nine, the Stern family moved to Germany. They returned to the US when she was a teenager.[3] She also lived for a time in Seattle, when her father was a professor of voice at the University of Washington.[2]

Rush's first album, titled with her original name of Heidi Stern, was released locally in Seattle, Washington, in 1979. After meeting singer, songwriter and producer Gene McDaniels in Seattle, Rush flew to LA to record demo songs with him. Rush credits McDaniels as being her first and most influential mentor as a songwriter and singer. In 1982, following McDaniels's persistence, Rush moved to Wiesbaden, Germany, where her father was engaged as an opera singer. As musicians, both her father and McDaniels were aware that Germany had been very welcoming to female singers. Although Rush is not of German heritage, she did speak some German, having spent part of her early childhood in Germany.

Rush continued to be a prolific songwriter and co-wrote many of the songs on her albums, with her producers most notably being Desmond Child, Phil Ramone, Michael J. Powell, Barry Eastmond, Christopher Neil and Diane Warren.

She scored hits as a singer throughout Europe, Africa and Asia with songs like "Ring of Ice," "Destiny," "I Come Undone," "Madonna's Eyes," "Flames of Paradise"(a duet with Elton John), "25 Lovers," "Till I Loved You"(a duet with Plácido Domingo), "Heart Over Mind", "You're My One and Only," "Who Wants to Live Forever" (a duet with Brian May from Queen), and "Amigos Para Siempre" (a duet with José Carreras).

Rush's parents had first met when they were both students at the Eastman School of Music in Rochester, New York. Jennifer dedicated her first album release to her mother, "In Memory of Barbara," who had died from cancer before its release and multi-million sales worldwide. Her older brothers both also became musicians: Robert "Bobby" Stern became a saxophonist, and Stephen Stern became a guitarist, a singer, and songwriter, using the name "Stevie Blue". In 2010, Rush revealed that she adopted her artist name "Jennifer" at the insistence of her first publishing/recording company, CBS Songs, the publishing unit of CBS Germany, with whom she signed her first contracts. At the very beginning of her career she wanted to concentrate only on her songwriting, not on singing. It was the co-written single "The Power of Love," the fifth and last single release from her first LP, that became the biggest selling single of 1985 in the United Kingdom, as well as becoming a significant hit in Australia, Ireland, Canada, Denmark, France, Germany, Italy, Japan, Norway, Portugal, South Africa and Sweden, and was listed in the Guinness Book of World Records as "the best-selling single by a female solo artist in the history of the British music industry." "The Power of Love" held that status until 1992, when it was outsold by Whitney Houston's "I Will Always Love You," which was later itself overtaken by Cher's "Believe."

"The Power of Love" topped the charts for more than eight weeks in Australia, South Africa and numerous European countries. But though it reached number one in several other countries, Rush's version reached only number 57 in the United States Billboard Hot 100 chart. After several cover versions by other artists, the Celine Dion version made a U.S. chart impact in 1994.

Rush remains successful singing in both English and Spanish, where her next two albums reached number 1 for 14 weeks and 9 weeks respectively. In the UK, however, her chart career saw only a few sporadic bursts of success, but she did manage three top 50 albums. It was Rush's 1987 album Heart over Mind, featuring compositions by Desmond Child, Michael Bolton, and Diane Warren, and guitar work from Richie Sambora (Bon Jovi), that finally brought her Top 40 success in her home country, with "Flames of Paradise," the Elton John duet mentioned above. She also recorded the duets likewise mentioned above with Michael Bolton, Plácido Domingo and Brian May.

Rush built her success through the 1990s, releasing four albums, the last being 1998's Classics, along with new songs, and also re-recording her biggest hits with the Hungarian Philharmonic Orchestra. After that she took some time off in New York, dedicating time to her daughter, who was born in 1993. She has recently publicly acknowledged being known as a songwriter and not a singer in New York City allowed her to raise her daughter in what she considered a more stable environment than she was raised. She could still travel and perform, but also enjoyed the admitted luxury of songwriting with colleagues based on the East Coast and being available to her daughter as a single mother. A series of greatest-hits compilation albums followed in the new millennium.

She released a boxed set Stronghold – The Collector's Hit Box in August 2007. This compilation included all Rush singles from 1982 to 1991 (with her first record company), and in their "extended versions," as available. It also included all the B-sides and other rare or unreleased tracks (among them four James Bond theme songs, recorded live in 1984 and only released in a very limited edition by the Berlin Philharmonic).

In March 6, 2009, she announced on her official website that she had signed a worldwide recording contract with Sony Music/Ariola for only one album, Now Is the Hour, which was released in 2010. This marked a return to the recording label where she had made her international breakthrough in the 1980s and on which she had released the first five studio albums of her career. Now Is the Hour was released on March 5, 2010, in most of Europe,[4] and on March 8, 2010 in the UK.[5] It was her first solo album not containing any of her own compositions in 10 years.

Between June and October 2015, Rush was in South Africa doing extensive recording, radio, and TV appearances, most notably being a mentor and guest artist singing two songs live on Idols South Africa October 4, 2015.

Rush has been writing and collaborating on songs for current and future releases for other artists and her own releases.

This article uses material from the article Jennifer Rush from the free encyclopedia Wikipedia and it is licensed under the GNU Free Documentation License.

A Natural Woman (You Make Me Feel Like) Doky Brothers
Update Required To play the media you will need to either update your browser to a recent version or update your Flash plugin.