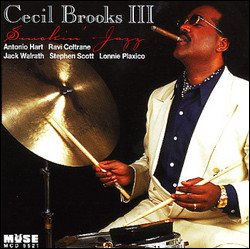 A native of the Homewood neighborhood of Pittsburgh, Pennsylvania, Brooks released a number of albums for Muse Records and then Savant Records.[2][3]

This article uses material from the article Cecil Brooks III from the free encyclopedia Wikipedia and it is licensed under the GNU Free Documentation License.

St. Louis Blues Tremble Kids
Update Required To play the media you will need to either update your browser to a recent version or update your Flash plugin.