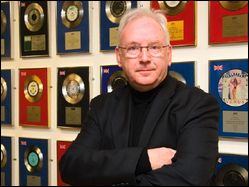 Peter Alan Waterman OBE (born 15 January 1947) is an English record producer, occasional songwriter, radio and club DJ, television presenter, president of Coventry Bears rugby league club and a keen railway enthusiast. He is the owner of significant collections of both historic and commercial railway locomotives and rolling stock, a passion and expensive hobby made possible by the huge commercial success of the acts he signed.

Born in Coventry, Waterman had left Whitley Abbey Comprehensive School (now rebuilt and called Whitley Abbey Community School) to work at a railway depot.[1] After closure of the depot, Waterman chose to follow a career in music, being inspired by The Beatles. To supplement his income as a DJ, Waterman became a gravedigger and then an apprentice at General Electric Company, becoming a trade union official.

Building a record collection through rare US imports,[1] his DJ work began to take him across the UK, entertaining bigger crowds with a blend of R and B and soul music tunes he had sourced. Given a residency with the Mecca group, he developed new initiatives including matinee discos for under 18s at Coventrys Locarno club, which gave him a valuable insight into what music interested a younger audience.[1] Waterman noticed that the younger dancers preferred records with high beats per minutes and this influenced his later work. It was at the Locarno that Pete first met Neville Staple, later to be a vocalist for The Specials - a band that Pete would manage for a brief period. In early 2009, Pete wrote the foreword to Neville's biography "Original Rude Boy", which is being published by Aurum Press later in 2009. According to Britishhitsongwriters.com he is the third most successful songwriter in U.K. chart history, based on the number of weeks his compositions have spent on the chart.[2]

Waterman took up a job as an A&R man, and worked in the Philadelphia scene, which included introducing The Three Degrees to the UK. He then moved to Jamaica working with Peter Tosh and Lee Perry, and producing Susan Cadogans reggae-crossover hit Hurts So Good.[1]

In 1979, Waterman set up Loose Ends with Peter Collins, the first coming under the name 14-18 with a single inspired by World War I - "Good-Bye-Ee," and then hits with artists like Musical Youth and Nik Kershaw. He then set up his own company PWL (Pete Waterman Limited), in 1984, quickly signing producers Matt Aitken and Mike Stock, who produced the Whatever I Do for Hazel Dean. The trio formed the team Stock Aitken Waterman, whom became one of the most successful musical production teams of 1980s.[1]

To date, Waterman has scored a total of twenty two UK number one singles with his various acts and he claims upwards of 500 million sales worldwide (inclusive of singles, albums, compilation inclusions, downloads, etc). Pete has also appeared in the Steps video "Tragedy".

Waterman is worth £30 million[3] according to the Sunday Times Rich List.

Waterman co-presented The Hitman and Her with Michaela Strachan. He also presented a show on Radio City.

In more recent years, Waterman has appeared as a judge on both series of Pop Idol in the UK, and also Popstars: The Rivals, the latter leading him to become manager of the winning boy band One True Voice. Waterman said to rival judge Louis Walsh that if One True Voice failed to reach the 2002 Christmas number one in the UK, he would commit suicide.[4] One True Voice were duly beaten to the number one spot by Girls Aloud, the programme's winning girl group, managed by Walsh. Waterman returned as judge for the second series of Pop Idol, but was constantly critical of the eventual winner, Michelle McManus, and was unashamedly unhappy when her victory was announced. Waterman has since said he will not appear on any similar programmes in future.[5]

Following his interests in railways, Waterman presented a historic self-retrospective view in Waterman on Railways for Channel Four/the Discovery Channel. Waterman also appeared in an advert by the National Blood Service in the UK, their sixth TV advert which also features Carol Smillie and Will Carling.

On 12 October 2008, Waterman joined his fellow ex-Pop Idol judges Neil Fox and Nicki Chapman on Peter Kay's Britain's Got The Pop Factor... And Possibly A New Celebrity Jesus Christ Soapstar Superstar Strictly On Ice, a spoof on the talent show genre of programmes.

Pete has been announced as one of the contestents in the 2009 series of the BBC programme Celebrity Masterchef.

In 1988 he revived the name of the London and North Western Railway Company for his rail vehicle maintenance business, based at Crewe, which was the largest privately owned rail maintenance business in the country until it was sold to Arriva in November 2008[6]. He also has an interest in model railways, and is the founder of the model railway business 'Just Like the Real Thing', which specialises in O scale kits. He works closely with model-maker Malcolm Mitchell on this project. He continues to retain an interest in the company and regularly accompanies its sales stand to model railway exhibitions. Waterman has an extensive private collection of railway models and railway layouts, in O scale and larger gauges.[7]

In addition to his passion for music and the railway, Waterman is also a huge supporter of Walsall FC.[8] He is also a rugby league fan and is president of Rugby League Conference side Coventry Bears.

In 2004 he was awarded an honorary doctorate in music by University College Chester.[9]

In the New Year's Honours List published 31 December, 2004 he was given an OBE for his services to music. In December 2006, he became a patron of the newly formed charity, the City, Lambeth and Southwark Music Education Trust.[10]

Waterman has been married three times:

This article uses material from the article Pete Waterman from the free encyclopedia Wikipedia and it is licensed under the GNU Free Documentation License.