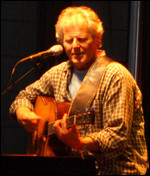 died on 21/6/2007 in Asperhofen, Niederösterreich, Austria

Georg Franz Danzer (October 7, 1946, Vienna June 21, 2007, Asperhofen,[1] Lower Austria) was an Austrian singer-songwriter. Although he is credited as one of the pioneers of Austropop (most famous are his comic songs "Jö schau" (about a streaker at the Café Hawelka) and "Hupf' in Gatsch", both in Viennese German), he always refused to be part of this genre.

Danzer was successful as a solo artist, but also in the group Austria3, along with Wolfgang Ambros and Rainhard Fendrich. Besides his music, he translated two books from Spanish into German, and was strongly involved in highlighting social inequalities, opposing racism and any form of societal discrimination, and the lifestyle of the bourgeoisie for all his life. Danzer was romantic, funny, socially engaged - and often a misfit. Having been a strong smoker for decades, he abstained from smoking after being diagnosed with lung cancer, but nevertheless died from the disease. His legacy includes some 400 songs.

Georg Danzer was the son of a communist Viennese magistrate [2] and a lazy student. After his Matura (high school leaving certificate) he hitchhiked through Germany, the Netherlands and Italy. In autumn 1966 he applied for admission to Vienna's Akademie für Darstellende Künste (Drama Academy), but was not accepted; so instead he started studying Philosophy and Psychology in Vienna. In a 1968 ORF-Interview he stated his intention to study Journalism, to which moderator Gerhard Bronner replied: "Shift to music soon, young man.[3]

In 1967 Danzer had started to write and play music after he returned from a longer hitchhiking tour of Crete, Hamburg, and Sweden. The next year he released his first single, Vera, and appeared on Austrian broadcast, but did not get a contract. Hitradio Ö3 editor Eva-Maria Kaiser took notice of him in 1970, and suggested that he could make a living by writing lyrics for "almost everybody in Vienna". During the next three years he wrote texts for Marianne Mendt, Margot Werner, Erika Pluhar, André Heller, Wolfgang Ambros and Wilfried. With Heller, Mendt and other young musicians, Schurli [4] often met in Gerhard Bronner's Cabaret Fledermaus. They invented Austrian pop music for the following decades.

During this time, singer-songwriters began to sing in Viennese German or even slang, exemplified by hits such as Wia a Glock'n (Marianne Mendt 1970; lyrics: Gerhard Bronner) and Da Hofa (Wolfgang Ambros 1971; lyrics by Joesi Prokopetz. For a while, Danzer was a member of the band The Madcaps and wrote a couple of their songs, among them Schneemensch, Sommer is, John Wayne. In 1972, the single Tschik (a slang word for cigarette) attracted public attention and was perceived as "scandalous": a homeless man talks and sings about his life! Today the first edition of the single is in great demand as a collector's item; it was housed in a simple paper bag, and no author or singer was credited. Later, Peter Barwitz from Ö3 had a voice analysis made, which identified Schurl(i) Danzer.

Next, in 1973, the album Honigmond appeared, which Danzer partially financed himself, and which flopped. In 1974, the concept album Der Tätowierer und die Mondprinzessin was released together with a book illustrated by the singer. Finally in 1975 Jö schau, a comic song about a streaker at the Café Hawelka, became a No 1 in the Austrian charts and stayed there for 20 weeks. In the same year the album Ollas leiwand (Slang for "Everything's all right") was released. On October 14 he married Dagmara, with whom he had been in a relationship since 1968.

The year 1976 brought good news for Danzer: his first daughter, Daniela, was born, and Danzer got a contract with a major label Polydor. Furthermore, English Music Week "Star of the Year, and five of his songs formed the soundtrack for the first Kottan ermittelt TV series.[5] The series, a parody criminal series set in 1970 Vienna, achieved cult status.

Danzer however moved towards Germany. In Berlin, the album Unter die Haut was produced in 1977. Michael Gechter (electric guitar), Earl Bostic (bass), Frank Lüdeke (saxophone), Eberhard "Bär Wieland (keyboard) and Olav Gustafson (percussion) formed Danzer's backing band, with which he recorded several successful albums over the following years. Although Danzer's work garnered many good reviews, he was blacklisted by several radio stations for his song War das etwa Haschisch? ("Was this possibly dope?"). At the end of 1977, the album Ein wenig Hoffnung was published in Germany, and at almost the same time, Narrenhaus (House of fools) was released in Austria.

"Georg Danzer Tournee 79 had 32 shows, and all of them had sold out. A double live album from this tour appeared in the following year. More successful albums soon followed (Traurig aber wahr 1980, Ruhe vor dem Sturm 1981). Even Austrians began to realize that Danzer was more than Jö schau. The ORF produced a 45-minutes feature, Danzer Direkt. In 1981, Danzer played 47 concerts solo (Live-Album Direkt), followed by an Open-Air-Tournee with Ludwig Hirsch, Konstantin Wecker, Chris de Burgh and Georges Moustaki. Die gnädige Frau und das rote Reptil, a book with lyrics and prose, appeared in 1982. In 1983, Danzer was among the first German-language musicians who created a CD-album (und so weiter).

In the summer of 1984, Danzer dissolved his legendary band and went to Munich to produce Weiße Pferde. During the production of its video clip (by Rudi Dolezal), he had a serious bike accident in Andalusia, and had to be flown back to Vienna because of heavy injuries. In 1985, his wife Dagmara filed for divorce, his former manager disappeared, he got in trouble with the financial revenue services, and his contract with Polydor came to an end.

In 1986, he was signed by Teldec (belongs to the Time-Warner group), and went to Spain to study Spanish, among other reasons. In 1988, he moved to Hamburg, travelled to Egypt and Kenia and became infected by Malaria. The next year saw Danzer and his new life partner, Bettina, move to a Farm in Werl-Holtum (Westfalen), where he spent most of his time until 1994, and where he translated two works of Spanish author Manuel Vicent.

From 1990, Danzer spent again some time in Vienna and produced the album Wieder in Wien ("Back to Vienna"), with Peter Cornelius (guitar), Marianne Mendt (vocals) and Wilfried (vocals). The following tour of Austria was successful. In 1992, he married Bettina, and his son Jonas was born.

His CD Nahaufnahme (featuring Hans Theessink, Dorretta Carter and others) was followed by a three-month tour of Austria, Germany and Switzerland in 1993. In 1994, another son, Jakob, was born, and the family moved to Austria. In 1995, the album Große Dinge (featuring Ulli Bäer, Gary Lux, Thomas Morá and Peter Barborik) was released, as well as an album of Viennese songs, Liada ohne Grund (with Adi Hirschal and Lukas Goldschmidt).

December 10, 1997 was the birth of Austria3. Rainhard Fendrich had gathered two friends for a single charity event for homeless people and thereby created one of the most successful Austrian groups. In the same year, Danzer was the first European musician to publish a CD-Extra with multimedia content ($ex im Internet). Whilst touring with Austria3, he still produced solo albums.

In 2000, Danzer became president of the human rights organization "SOS Mitmensch". In 2002, the double CD Sonne & Mond was released, a retrospective of his 30 years on stage. In 2004, the album Persönlich was published with Wolfgang Puschnig (saxofone), Achim Tang (bass) and Christian Eigner (percussion), also featuring Zabine and Katja Riemann.

In September 2006, Danzer informed the public that he was suffering from lung cancer. He had to cancel two concerts scheduled for the following October, one in Wiener Stadthalle, the other one in Circus Krone (Munich). In December 2006, he was one of the supporters of activities alerting to the dangers of smoking (Österreichische Lungenunion). The previously cancelled Vienna concert took place on April 16, 2007, and his friends, Ambros and Fendrich, joined Danzer for a few songs to rekindle the spirit of former days. The concert was a perfect success, but also Georg Danzer's last appearance in public.

Danzer died at home on June 21, 2007, and was cremated the next day. He wanted to keep his burial place secret; almost none of his friends were invited to the funeral, except his long-time manager Franz Christian "Blacky" Schwarz, whose duty it was to inform the press a few hours after the burial had taken place. Danzer had stated before his death that, if it were offered to him by Viennese authorities, he would refuse an honorary grave ("Ehrengrab") usually bestowed to artists of high calibre .[6]

In 1993, he was the second singer/songwriter awarded with Swiss Goldenes Ohr. In 1995, Belgian broadcast awarded him with "Silver Antenna" for having most song's lyrics in schoolbooks, worldwide. In 1996, he got Vienna's "Goldener Rathausmann", presented by Grete Laska and Harry Kopietz.[9] In 1999, Danzer, Ambros and Fendrich (Austria3) got BASF Master Award. In 2005, Amadeus Austrian Music Award, "Best Album of 2004" in category "Pop Album National", for Persönlich. In 2007, a second "Amadeus" for his life's career.

All quoted books are in German.

Translations by Danzer (from Spanish)

Unless noted otherwise, all references are in German.

This article uses material from the article Georg Danzer from the free encyclopedia Wikipedia and it is licensed under the GNU Free Documentation License.

The Night Has A Thousand Eyes Sonny Stitt & Bennie Green (2)
Update Required To play the media you will need to either update your browser to a recent version or update your Flash plugin.