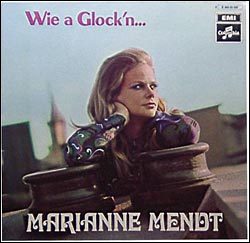 Mendt trained as a jazz singer and toured as a singer and bass player, with group the Internationals, around Europe. Back in Vienna she was noticed by talent-spotter Gerhard Bronner, who wrote for her the song "A Glock'n", which was used as the theme tune for a television drama and reached #12 when released as a single in 1970.[1] Marianne Mendt published several 'Austrian versions' of well-known jazz and pop songs like Mercy, Mercy, Mercy ("I kann net lang mit dir bös' sein"), Spinning Wheel ("A g'scheckert's Hutschpferd") and Aquarius/Let the Sunshine In ("Der Wasserkopf").

In 1971, Mendt was chosen by broadcaster ORF to represent Austria with the song "Musik" in the 16th Eurovision Song Contest, held in Dublin on 3 April. It marked Austria's return to Eurovision following a two-year absence. "Musik" - the only song performed at Eurovision to date in the Viennese German dialect[2] - was drawn as the show's opening song, and at the end of voting could only manage 16th place of the 18 entries, after a somewhat nervous and hesitant performance from Mendt.[3][4]

Mendt combined her singing career with acting in productions at the large Vienna theatres. In the 1990s, Mendt's acting career came to the fore, notably in the role of Gitti Schimek in TV drama Kaisermühlen Blues which ran from 1992 until 2000.[5]

This article uses material from the article Marianne Mendt from the free encyclopedia Wikipedia and it is licensed under the GNU Free Documentation License.

La valse d'Oscar François Ingold Trio
Update Required To play the media you will need to either update your browser to a recent version or update your Flash plugin.