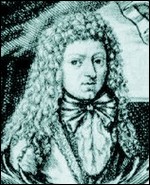 Johann Kuhnau (German pronunciation: [kuna]; 6 April 16605 June 1722) was a German composer, organist and harpsichordist. He was the predecessor of Johann Sebastian Bach as Thomaskantor in Leipzig from 1701 to 1722.

Kuhnau was born in Geising, present-day Saxony. He grew up in a religious Lutheran family. At age nine, he auditioned successfully for the Kreuzschule in Dresden. He sang in the Dresdner Kreuzchor and studied with Hering and Bental, later with Vincenzo Albrici.[1]

In 1680 he moved to Zittau, because Dresden was struck with the plague. He taught and worked in churches in Zittau. Kuhnau studied French and Italian, and left translations from Hebrew, Greek, and Latin as well. Kuhnau also studied law, attaining the rank of advocate. In addition to composition, much of his time was spent as a lawyer, a poet, and a non-fiction author. He preceded Johann Sebastian Bach as cantor of the Thomaskirche (St Thomas Church) in Leipzig, directing the Thomanerchor from 1701 to 1722. He was also music director of the Paulinerkirche. In Leipzig, Kuhnau taught Johann David Heinichen and Christoph Graupner. Kuhnau died in Leipzig on 5 June 1722.[1]

Kuhnau wrote sacred music on Bible stories, such as The Marriage of David Gideon and The Tomb of Jacob. One of his organ works is titled Der todtkranke und wieder gesunde Hiskias (Hiskias, sick to death and healthy again). Kuhnau is credited as the inventor of the keyboard sonata, elevating the form from simple dance tunes. His Eine Sonata aus dem B (a sonata from the b flat) in three movements is the first known keyboard sonata.[2] Kuhnau's secular vocal music is lost, but many of his sacred works have survived, including cantatas, motets; four sets of keyboard pieces have also survived.

The Christmas cantata Uns ist ein Kind geboren, formerly attributed to Bach as BWV 142, was most likely composed by Kuhnau.[3]

This article uses material from the article Johann Kuhnau from the free encyclopedia Wikipedia and it is licensed under the GNU Free Documentation License.

Sarah Second Line Big Band
Update Required To play the media you will need to either update your browser to a recent version or update your Flash plugin.