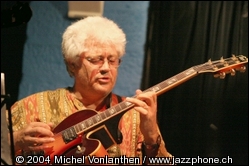 Coryell was born in Galveston, Texas. He graduated from Richland High School, in Richland, Washington, where he played in local bands the Jailers, the Rumblers, the Royals, and the Flames. He also played with the Checkers from nearby Yakima, Washington. He then moved to Seattle to attend the University of Washington.[2] He played in a number of popular Northwest bands, including the Dynamics, while living in Seattle.

In September 1965, Coryell moved to New York City, where he attended Mannes School of Music,[3]and then became part of Chico Hamilton's quintet, replacing Gabor Szabo. In 1967 and 1968, he recorded with Gary Burton. Also during the mid-1960s he played with the Free Spirits,[4] his first recorded band. His music during the late-1960s and early-1970s combined the influences of rock, jazz, and eastern music. He married writer-actress Julie Nathanson[5] before the release of his first solo album, Lady Coryell, which like Coryell, At the Village Gate and The Lion and the Ram featured her photos on the cover (there is a 'ghost' nude of her descending a staircase on the Aspects album cover). Julie's poetry was featured on the back cover of Ram. She was an important part[6] of his career, as inspiration, management, and appearances at recording sessions. She wrote a book based on interviews with jazz-rock musicians, including John Abercrombie, and Jaco Pastorius.[7]

In the early 1970s, he led a group called Foreplay with Mike Mandel, a childhood friend,[8][9] although the albums of this period—Barefoot Boy, Offering, and The Real Great Escape—were credited only to "Larry Coryell". He formed the group The Eleventh House in 1973. The albums sold well in college towns and the ensemble toured widely. Several of the group's albums featured drummer Alphonse Mouzon.

Following the breakup of this band, Coryell played mainly acoustic guitar but returned to electric guitar later in the 1970s. He released an album credited with Mouzon and an album with the Brecker Brothers that was recorded direct-to-disc, a recording method revived for a time. He made several acoustic duet albums, two with Belgian guitarist (and former Focus member) Philip Catherine. Their album Twin House (1977), which contained the song "Miss Julie", drew favorable reviews.

In 1979, Coryell formed The Guitar Trio with fusion guitarist John McLaughlin and flamenco guitarist Paco de Lucía. The group toured Europe and released a video recorded at the Royal Albert Hall in London entitled Meeting of the Spirits. In early 1980, Coryell's drug addiction led to him being replaced by Al Di Meola.[10] Julie Coryell sang on one track of Comin' Home (1984). The couple divorced in 1986. She died in 2009.[7] Coryell recorded the album Together with (and was briefly romantically involved with)[11] Emily Remler before her death from a heroin overdose while on tour in Australia. His two sons, Julian Coryell and Murali Coryell, are also involved in the music business.

Coryell died on February 19, 2017, of heart failure in New York City, at the age of 73. He was performing at the Iridium jazz club in Manhattan that weekend.[2][12]

In his review of the concert at the Iridium, David Miller of All About Jazz wrote:

When NPR radio host Billy Taylor, on one of the editions of Billy Taylor's Jazz at the Kennedy Center, introduced Coryell, he said:

With The Eleventh House

With The Free Spirits

With The Appletree Theatre

With The Jazz Composer's Orchestra

With The 5th Dimension

With The Arista All Stars

With The Wide Hive Players

With The Fusion Syndicate

This article uses material from the article Larry Coryell from the free encyclopedia Wikipedia and it is licensed under the GNU Free Documentation License.