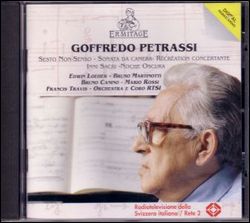 Goffredo Petrassi (16 July 1904 – 3 March 2003) was an Italian composer of modern classical music, conductor, and teacher. He is considered one of the most influential Italian composers of the twentieth century.[1]

Petrassi was born at Zagarolo, near Rome. At the age of 15 he began to work at a music shop to supply his family's financial needs, and became fascinated by music. In 1928, he entered the Santa Cecilia Conservatory in Rome to study organ and composition. In 1934, composer Alfredo Casella conducted Petrassi's Partita for orchestra at the ISCM festival in Amsterdam.

Petrassi's early work was part of an attempt by several Italian composers to create a national "Italian" revival in classical music, corresponding to the romantic work of Germans such as Richard Wagner. During this time, his work was characteristically neoclassical in style, influenced by Bartók, Hindemith and Stravinsky.

In later years, Petrassi's open musical mind and acute personality led him to experiment with different post-Webernian influences and a wide range of poetic materials, from Latin hymns to Ariosto's La follia d'Orlando and Cervantes' Ritratto di Don Chisciotte. All these influences are present in a remarkable series of eight Concerti for Orchestra which he composed between the late 1930s and the late 1970s.

Petrassi stopped composing in 1986 due to increasing loss of eyesight.

This article uses material from the article Goffredo Petrassi from the free encyclopedia Wikipedia and it is licensed under the GNU Free Documentation License.

Sunset Blues Jean-Marc "Che" Peyer
Update Required To play the media you will need to either update your browser to a recent version or update your Flash plugin.