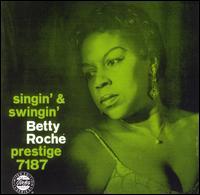 Mary Elizabeth "Betty" Roché (January 9, 1920 – February 16, 1999)[1] was an American blues singer who became most famous with her cover of the song "Take the "A" Train". She recorded with the Savoy Sultans, Hot Lips Page, Duke Ellington, Charles Brown and Clark Terry.[1]

Roché was born in Wilmington, Delaware, United States.[1] She settled in New York in 1939, started her career by winning an Apollo Theater amateur talent contest, sang with the Savoy Sultans from 1941 to 1942, then with Duke Ellington in the 1940s and 1950s. In 1953, she left the Ellington band and settled in San Diego, California. In 1960, she went back to New York and recorded for Prestige.

This article uses material from the article Betty Roché from the free encyclopedia Wikipedia and it is licensed under the GNU Free Documentation License.

The Wind Cries Mary markusphilippe
Update Required To play the media you will need to either update your browser to a recent version or update your Flash plugin.