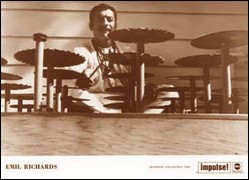 Richards started playing the xylophone at age six. In high school he performed with the Hartford Symphony Orchestra. He studied with Al Lepak at the Hartt School of Music in Hartford, graduating in 1952. After being drafted, he belonged to an Army band in Japan and played with Toshiko Akiyoshi.[1][2] He cites Lionel Hampton as his first and biggest influence on vibraphone.[2]

In 1954 Richards moved to New York City, where he played with Charles Mingus, Ed Shaughnessy, and Ed Thigpen while doing studio recordings for Perry Como, the Ray Charles Singers, and Mitchell Ayres.[3] For about three years he was a member of a group led by George Shearing, then moved to Los Angeles and worked with Don Ellis and Paul Horn. He led his own band, the Microtonal Blues Band, and spent time with composer and inventor Harry Partch. As a sideman, he accompanied George Harrison on tour and recorded with Frank Sinatra, Frank Zappa,[2] Doris Day, Judy Garland, Nelson Riddle, and Sarah Vaughan.[3]

Richards worked often as a studio musician for movies and television. His credits include playing bongos on the theme song for the television program Mission Impossible. He has led a band with Joe Porcaro, and he released a solo album, The Wonderful World of Percussion.[2]

In 1962, Richards went on a worldwide tour with Frank Sinatra to raise money for poor children. The tour increased Richards's fascination with ethnic percussion instruments.[3][4] During his career he has collected over 350 instruments, many of them more common in the East than the West.[1] Richards wanted his instruments to continue to be heard in recordings and other performances and to remain together as much as possible. The Emil Richards Collection includes common percussion, such as xylophone and marimba[5] and exotic, such as the angklung, bulbul tarang, chimta, flapamba, jal tarang, janggu, lujon, mbira, and pakhavaj.[4]

In 1992, he gave sixty-five instruments to the Percussive Arts Society museum in Lawton, Oklahoma. He is a member of the Society's Hall of Fame.[2] Part of the collection was sold to Los Angeles Percussion Rentals. Many instruments were restored and are used in recordings and other performances in Los Angeles.[6] LAPR works with Odd Art Fabrications to custom design and fabricate instruments and hardware such as chromatically tuned wood blocks and chromatically tuned bell plate.[7]

This article uses material from the article Emil Richards from the free encyclopedia Wikipedia and it is licensed under the GNU Free Documentation License.

Isn't She Lovely Milt Jackson & Monty Alexander Trio
Update Required To play the media you will need to either update your browser to a recent version or update your Flash plugin.