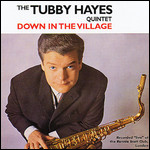 Hayes was born in St Pancras, London, and brought up in London. His father was a BBC studio violinist who gave his son violin lessons from an early age. By the age of ten, Hayes was playing the piano, and started on the tenor sax at 11. Dizzy Gillespie was an early influence:[3]

I always used to listen to swing music in the early 'Forties and, in fact, I was just a kid at the time. I did not really intend becoming a tenor player, though I always liked tenor. I think maybe Dizzy influenced me more than Parker because he was sort of more accessible, he caught your attention more. As far as my influences over the years are concerned, Getz was it at one stage in the proceedings, and later Rollins, Coltrane, Hank Mobley and, to a lesser degree, even Zoot [Sims].

One much repeated story about Hayes' early career was told by Ronnie Scott. Scott was playing at a club in Rose Hill near Sutton, and was asked whether he minded if a local player sat in: "This little boy came up, not much bigger than his tenor sax. Rather patronisingly I suggested a number and off he went. He scared me to death."

Hayes attended Rutlish School in Merton Park, south London, where his music teacher was Roy Howard. After a period spent playing with various semi-professional bands around London, Hayes left school and started playing professionally at the age of 15.

In 1951, aged 16, Hayes joined Kenny Baker's sextet, later playing for big-band leaders such as Ambrose, Terry Brown, Tito Burns, Roy Fox, Vic Lewis and Jack Parnell. In 1955, he formed his own octet, with which he toured the UK for 18 months.

Hayes took up the vibraphone in early 1957, having tried Victor Feldman's instrument on a gig. Although the vibes were a key double in his instrumental arsenal, he eventually tired of playing them, recording his final solo on the instrument in 1966.

From 1957 to 1959, he joined Ronnie Scott in co-leading a quintet, The Jazz Couriers, perhaps the most fondly remembered of British modern jazz groups.

Hayes took up the flute in 1958, making his recording debut on the instrument a year later. He continued to feature the flute throughout the remainder of his life.

Subsequently, Hayes reformed his quartet, and toured Germany with Kurt Edelhagen. Then, in 1961, he was invited to play at the Half Note Club in New York City; a new transatlantic Musicians' Union agreement meant that, in exchange, Zoot Sims played at Ronnie Scott's. While in the United States, Hayes recorded (Tubbs In N.Y.) with Clark Terry, Eddie Costa, and Horace Parlan, returning in 1962 for another visit, this time recording Return Visit! with James Moody, Roland Kirk, Walter Bishop Jr, Sam Jones and Louis Hayes. He played at the Half Note again in 1964, and at the Boston Jazz Workshop the same year, and at Shelly Manne's Manne-Hole in Los Angeles in 1965.

Back in London, Hayes formed his own big band, working in television, film and radio, and even having his own television series (1961–1962, and 1963). He stood in for Paul Gonsalves in February 1964 (with whom he also recorded twice: Just Friends taped in February 1964 and Change of Setting recorded a year later), when the Ellington orchestra played at the Royal Festival Hall.

As well as leading his own bands and recording under his own name, Hayes also appears on recordings by other UK jazz musicians, such as the Harry South Big Band, the Ian Hamer Sextet and later studio sessions by Ted Heath's Orchestra. Hayes was also a prolific session musician in many genres. Among his many credits, Hayes was one of the session musicians on Music in a Doll's House, the 1967 debut album by rock band Family, on which Mike Batt arranged the strings and brass. Batt credits Hayes with saving his arrangement on the track "Old Songs for New Songs", which was his first major recording session as an arranger—on the first take, he discovered he had inadvertently notated the parts in the wrong key but Hayes and his colleagues, realising his mistake, discreetly transposed their parts by ear so that they would match the backing track.[4]

Hayes appeared in a number of films, including All Night Long (1961) with Dave Brubeck and Charles Mingus, and (with his group) in A King in New York directed by Charlie Chaplin (1957), The Beauty Jungle (1964) and Dr. Terror's House of Horrors (1965). He also played at jazz festivals, including Reading, Windsor, Antibes, Lugano, Vienna and Berlin.

By the mid-sixties, regular gigs were harder to come by for British jazz musicians; first rock and roll, and then rhythm & blues and The Beatles had altered the musical landscape and as a result Hayes now rarely worked at London clubs like 'The Flamingo' and 'The Marquee' at which he'd been a regular headliner during the late 1950s and early 1960s. Matters were made worse by a combination of relationship, alcohol and narcotics issues, which by 1968 had begun to publicly affect his career. He was arrested in August 1968 for possession of heroin and was given a suspended sentence. By the end of the following year, he had begun to experience breathing difficulties when playing, the latest in a long series of afflictions. In 1970, Hayes spent 15 weeks in a hospital with a severe infection of his internal organs. In July 1971, he underwent open heart surgery to replace the Mitral Valve. This operation was a success and he was able to start performing again in December 1971. In 1972, he toured Norway, Sweden and Finland.

Hayes died In 1973, during a second heart operation at Hammersmith, at the age of 38. He was cremated and the ashes interred at the Golders Green Crematorium, where there is a white stone memorial plaque affixed to one of the walls. The epitaph reads "Long Live His Memory And His Music".

Hayes left a legacy of recordings which became sought-after collectors' items, almost all of which have been re-issued on CD. Despite a rumour that some early Tempo master tapes owned by Decca were discarded by the company,[5] it was discovered that certain masters did still exist, including those for one of Hayes's best albums, Tubby's Groove, recorded in 1959. Further tapes from this session were sent to Blue Note Records for audition in 1960 but were subsequently lost until they were rediscovered in 2008. These were included in the album Tubby's New Groove, issued by Candid in 2011.

In 2015, a full-length biography, The Long Shadow of The Little Giant: The Life, Work and Legacy of Tubby Hayes by Simon Spillett was published by Equinox Publishing. The book received praise in both the specialist and non-specialist press, and was nominated among the top books of 2015 by The Guardian. Spillett has also catalogued Hayes private tape archive and has organised the release of many previously unheard Hayes sessions on labels including Art Of Life, Rare Music, Harkit, Tentoten, Savage Solweig, Gearbox, Candid, Jasmine, Proper, Acrobat, Fantastic Voyage, Avid and Real Gone Jazz.

A DVD documentary, Tubby Hayes: A Man In A Hurry, directed by Lee Cogswell and produced by Mark Baxter, with narration by actor Martin Freeman, was released in 2015. It contains archive footage and interviews with fellow musicians, friends, family and fans of Hayes.

With Tony Crombie and His Men

With Johnny Dankworth and His Orchestra

With Georgie Fame and The Harry South Big Band

With The Stan Tracey Big Band

This article uses material from the article Tubby Hayes from the free encyclopedia Wikipedia and it is licensed under the GNU Free Documentation License.