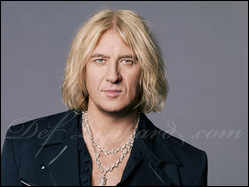 Joseph Thomas Elliott Jr. was born in Sheffield and was educated at King Edward VII School. Elliott met Pete Willis; a member of a local band called Atomic Mass; in November 1977 after missing a bus. Upon finding out that they were both musicians, Elliott met the rest of the Atomic Mass members. The band spent hours talking and listening to records in Elliott's bedroom. Elliott tried out as a guitarist and, though the band had not heard Elliott sing, they were impressed by "his attitude and his ideas about being in a band" and he became the band's vocalist instead. The other members also took Elliott's suggestion to change their name to "Deaf Leopard." Elliott had invented the name for the band in youth. Tony Kenning suggested they change the band name to "Def Leppard" to distinguish them from contemporary punk bands like The Flying Lizards and Boomtown Rats. The band claims that any apparent similarity of the name Led Zeppelin to Def Leppard was unintentional.[3] Elliott soon became an integral part of the band while also contributing his songwriting skills.

As a songwriter, Elliott has drawn from his eclectic tastes in music (ranging from pop-rock to folk) as sources of inspiration. He has noted that the lyrics to Def Leppard's music are rarely personal; they are meant to be easily accessible to the listener. He also plays guitar and drums as well as piano and electronic keyboard.

Elliott has worked with several side projects through his career such as participating in numerous tributes to other artists like Freddie Mercury, Alice Cooper, Mick Ronson, Ian Hunter and David Bowie. He appeared alongside guitarists Brian May and Slash along with the other members of Def Leppard at the Freddie Mercury Tribute Concert in 1992 to perform "Tie Your Mother Down".

Elliott also has worked on several projects including The Rolling Stones guitarist Ronnie Wood's solo album Slide on This, Lori Spree's Those Faces, Ricky Warwick and The Almighty.

Elliott and fellow Def Leppard member Phil Collen once had a side project together called Cybernauts. The project was short-lived, and the internet album that was available online has been deleted since its 2001 release.

Elliott sung the vocals in the Mott the Hoople cover band, Down 'n' Outz on their album My ReGeneration Vol. 1.

In 2012 Elliott went on tour with the Rock N Roll All Stars, a band that consisted of many of rock's most recognized performers. The band downsized and became the Kings of Chaos. The primary members with Elliott are Duff McKagan (Guns N' Roses, Velvet Revolver and Loaded), Matt Sorum (Guns N' Roses and Velvet Revolver), Gilby Clarke (Guns N' Roses), and Steve Stevens (Billy Idol's band). Others who round out the group are: Glenn Hughes (Deep Purple) and Sebastian Bach (formerly of Skid Row). The band released the cover song "Never Before" by Deep Purple. Hughes has stated the band will release a series of EPs with each EP featuring an original song and each EP featuring various genres of music: hard rock, alternative and punk. The tour are expected to feature these songs along with songs by Def Leppard, Guns N' Roses, Velvet Revolver, Loaded, Deep Purple and Skid Row. Elliott will be on lead vocals and will occasionally play guitar, McKagan will play bass and occasionally play guitar, Sorum will be on drums, Stevens and Clarke will be on lead guitars.

Elliott currently lives in Stepaside, Dublin, Ireland and also has a residence in Los Angeles. He maintains a recording studio in his Dublin home called Joe's Garage in which he has recorded and produced many major artists. Other artists have also recorded there while he has been on the road with Def Leppard. Elliott is also a Sheffield United fan, having contributed music to the Sheffield-based film When Saturday Comes. Elliott dated Denise Dakin from 1979 until 1988. Elliott's first marriage was to Karla Ramdhani in 1989; they separated in 1994 and divorced in 1996. Elliott dated Bobbie Tolsma from 1999 to 2003. Elliott married Kristine on 1 September 2004, and their first child, Finlay, was born in December 2009 and are also parents to a daughter, born circa 2016.[[1]]. Elliott's father, Joe Elliott Sr, died in July 2011 after being ill for a number of weeks.[5]

During a performance on 7 September 1983 in Tucson, Arizona, Elliott attempted to rile the crowd during the "Rock of Ages" crowd sing-a-long. He told the crowd: "Last night, we played in El Paso, that place with all the greasy Mexicans, and they made a lot more noise than that." Then, on 30 September he apologized on an El Paso radio station for the racial slur he made while referring to the city on 7 September. The band later followed up the apology with donations to Hispanic charities.[6]

In 2008, Def Leppard performed live on stage at a Detroit Red Wings ice hockey game. Midway through the set, Red Wing forward Darren McCarty drove a motorcycle across the stage with the Stanley Cup on the back. Another Detroit player, Kyle Quincey, handed the cup to Elliott, who unintentionally placed the Cup upside-down on its stand. Upon realizing his error, Elliott quipped to the crowd, "Oh it's upside down. Well never mind. We're soccer boys, what do we know?" The incident angered many ice hockey fans. Elliott later said, "[E]very other sporting cup I've ever seen, was wider at the top than the base [...] Like most of my fellow Brits, I'd never seen it before until it was handed to me sideways by which time I had a 50/50 chance of getting it right."[7]

In 2010, Elliott criticised the British music press, which he accused of ignoring his band and narrowing popular taste:

With Down 'n' Outz

With Kings of Chaos

This article uses material from the article Joe Elliott from the free encyclopedia Wikipedia and it is licensed under the GNU Free Documentation License.

East Of The Sun George Robert & Dado Moroni
Update Required To play the media you will need to either update your browser to a recent version or update your Flash plugin.