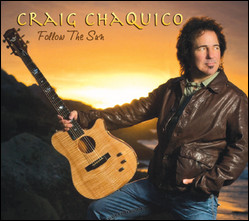 Craig Chaquiço (born September 25, 1954) is an American guitarist from Sacramento, California who has had over thirty years of success in a variety of genres: in the 1970s with the post-Summer of Love Jefferson Starship, in that band's 1980s incarnation, Starship, and in the 1990s and 2000s as a Smooth Jazz and New Age solo artist.

Chaquiço began playing the guitar as a young boy and by the age of 14 was playing professionally in nightclubs. Paul Kantner of Jefferson Airplane saw him play as a 16-year-old, and invited Chaquiço to join him for a series of recording sessions and concerts. During this period members of the Airplane, the Grateful Dead, Quicksilver Messenger Service and Crosby, Stills and Nash often appeared together in concerts and recordings, and Chaquiço played alongside a number of legendary musicians including Jerry Garcia, David Crosby, David Freiberg and Carlos Santana. His first recording was with Kantner and Grace Slick in 1971 on their Sunfighter duo album.

After informally joining the newly-renamed Jefferson Starship he expected to go back to school after one tour. Instead, Grace Slick and Kantner approached him in 1974 and asked if he wanted to join the band permanently. He jumped at the chance.

Chaquiço remained with the band when Kantner left and the band morphed into Starship. Many people remember his guitar riffs from We Built This City, as well as his flowing long brown hair in the accompanying video. He co-wrote one of Starship's most memorable songs, "Find Your Way Back" from 1981's under-rated "Modern Times" LP. A smooth jazz version of this same tune also appears on Chaquiço's 1994 solo CD "Acoustic Planet".

When Starship broke up, Chaquiço formed Big Bad Wolf, a hard rock band continuing in the same vein as Starship. The group recorded one album, entitled 'Big Bad wolf' before disbanding. He then forged a new career as a Smooth Jazz/New Age guitarist. He has collaborated with Ozzie Ahlers for his ten solo albums since 1993. The most famous of all is his second album, 1994's Acoustic Planet. This album garnered Chaquiço a Grammy Nomination for Best New Age album. Since then Chaquiço has cemented his standing as one of the top-selling Smooth Jazz/New Age artists.

In addition to his work with the various incarnations of Jefferson Starship, he also has worked regularly for the last 25 years as a studio musician with a wide range of artists, including Commander Cody, Mickey Thomas and Tom Scott.

With Paul Kantner and/or Grace Slick (as Lead Guitarist)

With Jefferson Starship (as Lead Guitarist)

With Starship (as Lead Guitarist)

This article uses material from the article Craig Chaquiço from the free encyclopedia Wikipedia and it is licensed under the GNU Free Documentation License.

Is You Is Or Is You Ain't... Terri Richards Alden/Warren Vaché Quartet
Update Required To play the media you will need to either update your browser to a recent version or update your Flash plugin.