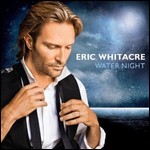 Eric Whitacre (born January 2, 1970) is a Grammy-winning American composer and conductor, known for his choral and wind ensemble music. In addition to Whitacre's list of choral and orchestral compositions, he is also known for his "Virtual Choir" projects, bringing individual voices from around the globe together into an online choir.[1][2]

Born in Reno, Nevada, Whitacre studied piano intermittently as a child, later joining a junior high marching band under band leader Jim Burnett and later playing synthesizer in a techno-pop band, dreaming of being a rock star.[3][4] Whitacre began his full musical training while an undergraduate at the University of Nevada, Las Vegas, taking a BA in musical education, though he was unable to read music at the time.[3] Whitacre states that the first work that he sang, Mozart's Requiem, changed his life.[3] He studied composition with Ukrainian composer Virko Baley and choral conducting with David Weiller, completing his BA in Music in 1995. Whitacre credits Weiller with the inspiration that put the young composer on the musical path.[4] At 21 he wrote his setting of Go, Lovely Rose for his college choir and presented the composition as a gift to David Weiller. Whitacre went on to earn his Master's degree in composition at the Juilliard School, where he studied with John Corigliano and David Diamond.[4][5] At the age of 23 he completed his first piece for Wind Orchestra, Ghost Train, which has now been recorded over 40 times. He acknowledges the great support of his mentor Tom Leslie in the development of composition for wind ensembles and in the writing of Ghost Train particularly.[4] While at Juilliard he met his future wife Hila Plitmann and two of his closest friends Steven Bryant and Jonathan Newman. He lived in the state of Nevada until he was 25. He graduated in 1997 and moved to Los Angeles and following the success of Ghost Train, he decided to become a full-time professional composer.[3][4]

Whitacre's first album as both composer and conductor on Decca/Universal, Light & Gold,[6] won a Grammy in 2012, and became the no. 1 Classical Album in the US and UK charts within a week of a release.[7] Eric's second album, Water Night, was released on Decca in April 2012 and featured performances from his professional choir the Eric Whitacre Singers, the London Symphony Orchestra, Julian Lloyd Webber and Hila Plitmann.

Whitacre has written for the London Symphony Orchestra and Chorus, Chanticleer, Julian Lloyd Webber, Philharmonia Orchestra, Rundfunkchor Berlin and The King's Singers, among others. His musical, Paradise Lost: Shadows and Wings,[8] won both the American Society of Composers, Authors and Publishers Harold Arlen award and the Richard Rodgers Award, and earned 10 nominations at the Los Angeles Stage Alliance Ovation Awards. Whitacre also worked with film composer, Hans Zimmer, co-writing the Mermaid Theme for Pirates of the Caribbean: On Stranger Tides. In 2011, Eric conducted the winning entries of the Abbey Road 80th Anniversary Anthem Competition, recording the London Symphony Orchestra and the Eric Whitacre Singers, in Abbey Road Studio 1. Whitacre's Soaring Leap initiative is a dynamic one-day workshop where singers, conductors and composers read, rehearse and perform several of his works.[9]

Whitacre has addressed the U.N. Leaders programme and has given a TED talk in March 2011 on his virtual choirs project.[10] He has addressed audiences at Duke, Harvard, The Economist, Seoul Digital Forum and JCDA Conference in Tokyo. From October to December 2010, Whitacre was a visiting Fellow at Sidney Sussex College, Cambridge during Michaelmas (Autumn) Term.[11] He composed a piece for the Choir of Sidney Sussex College, Cambridge and worked with students in masterclasses and workshops.

Many of Eric Whitacre's works have entered the standard choral and symphonic repertories and have become the subject of scholarly works and doctoral dissertations. Whitacre has received composition awards from the Barlow International Composition Competition, the American Choral Directors Association (ACDA) and the American Composers Forum. In 2001, he became the youngest recipient ever awarded the Raymond C. Brock commission by the ACDA.

Whitacre writes music that incorporates contemporary sounds. He is probably best known for his choral works; however, both his choral and instrumental styles use pan-diatonic clusters usually arranged in successive increasing or decreasing density. Whitacre achieves this growth and decay by splitting voices divisiin one case up to 18 parts. These sonorities can often be read as seventh or ninth chords, with or without added seconds and fourths. Perhaps his most famous chord is a root-position major triad with an added major second and/or perfect fourth. Whitacre makes frequent use of quartal, quintal and secundal harmonies, and is also known for his use of unconventional chord progressions. His use of rhythm often involves mixed, complex, and/or compound meters. His pieces sometimes include frequent meter changes and unusual rhythmic patterns. Another trademark of Whitacre's pieces is the use of aleatoric and indeterminate sections, as well as unusual score instructions involving, in some cases, hand actions and/or props.[12]

Critic Robert Hollingworth commented: "what hits you straight between the eyes is the honesty, optimism and sheer belief that passes any pretension. This is music that can actually make you smile."[13]

Whitacre's Virtual Choir projects were inspired by a video sent to him of a young girl named Britlin Losee[14] from Long Island, New York[15] singing one of his choral pieces.[16] He began with a test run of Sleep, then Lux Aurumque in 2009[1][17] and then Sleep again in 2010.

Whitacre's Virtual Choir performance of Lux Aurumque, has received 3 million views (as of August 2012), featuring 185 singers from 12 different countries.[1] Eric Whitacre's Virtual Choir 2.0, was released in April 2011 and involved over 2,000 voices from 58 countries.[18] Virtual Choir 3, Water Night, written in 1995, combined 3746 submissions from 73 countries and was released in April 2012.[19][20] By the entry close date of 1 February 2012, 3,746 videos had been uploaded by 2,945 people in 73 countries, singing one or more parts of "Water Night". On 15 April, on the exact 100 year anniversary moment of the sinking of the Titanic, the "Water Night" Virtual Choir video was shown in the new Titanic Belfast commemorative building, in remembrance of those lost in the disaster. In December 15, 2012, Whitacre launched his "kickstarter campaign," a $100,000 fundraiser to raise money for Virtual Choir 4.[21] Associated with the project was the title "Virtual Choir 4: Bliss," hinting that the selection for VC4 is an arrangement of "Bliss," the final piece from Eric Whitacre's electronica opera "Paradise Lost: Shadows and Wings." The project has officially been backed as of January 22, 2013.[22] VC4 was later renamed "Fly to Paradise" and contains 8,409 videos from 5,905 people from 101 different countries. It launched at the Coronation Festival at Buckingham Palace/BBC1 on July 11, 2013.

Whitacre has worked collaboratively with Distinguished Concerts International New York[26] (DCINY). With regard to his musical Paradise Lost: Shadows and Wings, he was described by The New York Times as a "younger, hipper Andrew Lloyd Webber, with fleeting hints of Bernstein and Sondheim".[27]

On 24 October 2010, he conducted an all-American programme with the London Symphony Orchestra and Chorus at the Barbican London in a performance that featured his commission for the London Symphony Chorus entitled Songs of Immortality. On 28 November 2010, he sat on the panel of judges for the final episode of Choir of the Year, broadcast on BBC Four and BBC Radio 3. In December 2010, Whitacre conducted the I Vocalisti choir in Hamburg, and was a guest conductor of the Christmas performance of the Berlin Rundfunkchor. In November 2010, Whitacre conducted Côrdydd, a Cardiff-based mixed choir, and friends in a concert of his work at the BBC Hoddinott Hall in the Wales Millennium Centre. He continues to develop his musical Paradise Lost: Shadows and Wings. A concert version was given at Carnegie Hall in 2010.[27] Plans for the stage show and soundtrack extend into 2013.

Whitacre is a founding member of BCM International, a quartet of composers consisting of himself, Steven Bryant, Jonathan Newman and James Bonney, which aspires to "enrich the wind ensemble repertoire with music unbound by traditional thought or idiomatic cliché."[28]

Whitacre has won awards from the Barlow international composition competition, American Choral Directors Association, American Composers' Forum and in 2001 became the youngest recipient ever of The Raymond C Brock Commission given by the American Choral Directors Association. His musical Paradise Lost: Shadows and Wings earned him a Richard Rodgers Award and received 10 nominations at the 2007 Los Angeles Stage Alliance Ovation Awards. The album Cloudburst and Other Choral Works received a Grammy nomination in 2007 for Best Choral Performance. Later, his album "Light and Gold" won a Grammy for Best Choral Performance in 2012.[29]

This article uses material from the article Eric Whitacre from the free encyclopedia Wikipedia and it is licensed under the GNU Free Documentation License.

Just Friends Bernita Bush & Juan Gonzalez Trio
Update Required To play the media you will need to either update your browser to a recent version or update your Flash plugin.