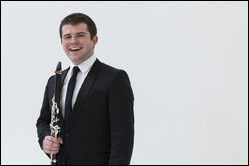 Julian Bliss (born 1989) is a British clarinettist and clarinet designer. He has performed both as a soloist and as a chamber musician, notably with his teacher Sabine Meyer. He also recently designed the Bliss Clarinet for instrument manufacturer Leblanc.

Bliss started playing clarinet at age 4, when he was given a Lyons C Clarinet, a clarinet designed to let children begin the clarinet four or more years younger than usual. Most students do not play wind instruments until age 11 or 12.[1]

Bliss earned his Postgraduate Artist's Diploma from Indiana University in 2001 at age 12, but he was not awarded his diploma until he graduated from high school.[2] He studied first with David Johnston at Harpenden, Paul Harris, then with Howard Klug at Indiana and with Sabine Meyer in Germany at the Musikhochschule.[3]

Bliss won the 2001 Concerto Soloists Young Artists Competition in Philadelphia.[2] In 2002, he performed at Queen Elizabeth II's Golden Jubilee (during the Prom at the Palace) by royal invitation.[2] He also performed at the Queen's 80th birthday.[4]

Bliss also has a career as a chamber musician. He has collaborated with many of the world's top classical artists, including Joshua Bell, Stephen Kovacevich, Elena Bashkirova, Julian Rachlin, and Hélène Grimaud.[3]

He was the subject of a three-part made-for-television documentary entitled "Gifted".[3] He also appeared on the Today program in the United States and on NHK in Japan.[5]

In collaboration with Leblanc, Bliss developed the Leblanc Bliss clarinet.[6] Says Bliss of the line: "I know I can pick up any Bliss clarinet and be able to perform at the level to which I am accustomed."[6] He characterizes the clarinet's design as "wicked".[7]

The design deviates from standard synthetic clarinets in that it does not use acrylonitrile butadiene styrene (ABS), but instead uses a custom composite that produces 20% more amplitude.[7] The barrel and bell are narrower (and thus lighter) than standard clarinets, and the keys are plated in black nickel to differentiate the clarinet's appearance from those with traditional silver-coloured keys.[7] The bore has several tapers and is manufactured to tolerances of hundreds of thousandths of an inch.[1] The right hand trill keys are above the gravity line to reduce the risk of water in the tone holes.[1]

This article uses material from the article Julian Bliss from the free encyclopedia Wikipedia and it is licensed under the GNU Free Documentation License.

Smart Eyes Alexander Wyssmann Twilight Trio
Update Required To play the media you will need to either update your browser to a recent version or update your Flash plugin.