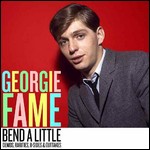 Georgie Fame (born Clive Powell; 26 June 1943) is an English rhythm and blues and jazz singer and keyboard player. Fame, who had a string of 1960s hits, is still a popular performer, often working with contemporaries such as Van Morrison and Bill Wyman.[1]

Fame was born in Leigh, Lancashire. He took piano lessons from the age of seven and on leaving Leigh Central County Secondary School at 15 he worked for a brief period in a cotton weaving mill and played piano for a band called the Dominoes in the evenings. After taking part in a singing contest at the Butlins Holiday Camp in Pwllheli, North Wales he was offered a job there by the band leader, early British rock'n'roll star Rory Blackwell.

At sixteen years of age, Fame went to London and, on the recommendation of Lionel Bart, entered into a management agreement with Larry Parnes, who had given new stage names to such artists as Marty Wilde and Billy Fury. Fame later recalled that Parnes had given him an ultimatum over his forced change of name: "It was very much against my will but he said, 'If you don't use my name, I won't use you in the show'".[3]

Over the following year Fame toured the UK playing beside Wilde, Joe Brown, Gene Vincent, Eddie Cochran and others. Fame played piano for Billy Fury in his backing band, the Blue Flames. When the backing band got the sack at the end of 1961, the band were re-billed as "Georgie Fame and the Blue Flames" and went on to enjoy great success with a repertoire largely of rhythm and blues numbers.

Fame was influenced from early on by jazz and such blues musicians as Willie Mabon and Mose Allison, and was one of the first white artists to be influenced by the ska music he heard in Jamaican cafes in and around Ladbroke Grove. Black American soldiers who visited the Flamingo Club, where the band had a three-year residency, would play him the latest jazz and blues releases from America, "Midnight Special" by Jimmy Smith, "Grooving With Jug" by Gene Ammons and Richard "Groove" Holmes, and "Green Onions" by Booker T. & the M.G.'s. Fame later recalled:

... it was a great place to play, a midnight to 6am thing on Fridays and Saturdays, and it was full of American GIs who came in from their bases for the weekend. They brought records with them and one of them gave me "Green Onions" by Booker T & the MG's. I had been playing piano up to that point but I bought a Hammond organ the next day."[4]

In August 1963 the band took a weekly Friday-night spot at "The Scene" on Great Windmill Street. In September 1963 the band recorded its debut album, Rhythm And Blues at the Flamingo, live at the Flamingo Club. Produced by Ian Samwell, who had previously played with Cliff Richard, and engineered by Glyn Johns,[5] the album was released, in place of a planned single, on the EMI Columbia label. It failed to reach the chart but the October 1964 follow-up, Fame at Last, achieved No. 15 on the UK album chart. In 1964 Fame and the band appeared on five episodes of ITV's Ready Steady Go![6]

When Ronan O'Rahilly, who then managed him, could not get Fame's first record played by the BBC[7] and was also turned down by Radio Luxembourg, he announced that he would start his own radio station to promote the record.[8] The station became the offshore pirate radio station Radio Caroline.[9]

Fame subsequently enjoyed regular chart success with singles, having three Top 10 hits, which all made number one in the UK Singles Chart.[1] His version of "Yeh, Yeh", released on 14 January 1965, spent two weeks at No. 1 on the UK singles chart and a total of 12 weeks on the chart. The following-up single, in 1965, was "In The Meantime", which also charted in both UK and US. Fame made his US television debut that same year on the NBC Hullabaloo series. His single "Get Away", released on 21 July 1966, spent one week at No. 1 on the UK chart and 11 weeks on the chart in total. The song was originally written as a jingle for a television petrol advertisement.[10] It was later used as the theme tune for a quiz show on Australian television. After the song was a hit Fame disbanded his band and went solo.

Fame's version of the Bobby Hebb song "Sunny" made No. 13 in the UK charts in September 1966.[11] The follow-up, "Sitting in the Park", a Billy Stewart cover, made No. 12. His greatest chart success was "The Ballad of Bonnie and Clyde" in 1967, which was a number one hit in the United Kingdom, and No.7 in the United States. "Yeh Yeh" and "The Ballad of Bonnie and Clyde" sold over one million copies, and were awarded gold discs.[12]

Fame continued playing into the 1970s, having a hit, "Rosetta", with his close friend Alan Price, ex-keyboard player of the Animals, in 1971, and they worked together extensively for a time. In 1974, Fame reformed the Blue Flames and also began to sing with Europe's finest orchestras and big bands, a musical tradition he still currently pursues. During the 1970s, he also wrote jingles for several UK radio and TV commercials, and composed the music for the feature films Entertaining Mr Sloane (1970) and The Alf Garnett Saga (1972). The theme tune from Entertaining Mr Sloane was issued as the B-side of the 1970 single "Somebody Stole My Thunder".

Fame has collaborated with other successful popular musicians. He has been a core member of Van Morrison's band, as well as his musical producer. Fame also played keyboards and sang harmony vocals on such tracks as "In the Days before Rock 'n' Roll" from the album Enlightenment, while still recording and touring as an artist in his own right. Fame played organ on all of the Van Morrison albums between 1989 and 1997, and starred at Terry Dillon's 60th-birthday party on 10 May 2008. Morrison refers to Fame in the line "I don't run into Mr. Clive" in his song "Don't Go to Nightclubs Anymore" featured on the 2008 Keep It Simple album. Fame appeared as a special guest on Morrison's television concert show presented by BBC Four series on 25 and 27 April 2008.

Fame has frequently played residences at jazz clubs, such as Ronnie Scott's. He has also played organ on Starclub's album. He was the headline act on the Sunday night at the Jazz World stage at the 2009 Glastonbury Festival, this following a headline gig the night before at the "Midsummer Music @ Spencers" festival in Essex.[14]

On 18 April 2010, Fame, together with his two sons Tristan Powell (guitar) and James Powell (drums), performed at the Live Room at Twickenham Stadium,[15] as part of the 10th-birthday celebrations of "The Eel Pie Club".[16] Part of the proceeds from the concert will benefit The Otakar Kraus Trust, which provides music and voice therapy for children and young people with physical and mental difficulties. The trio performed later that same year at the opening night at Towersey Festival.[17]

Fame has been the popular headline act at the Croatian Grosnjan Jazz Festival for several years, as a result of his connection with the now deceased Croatian vibraphone player Boško Petrović who founded it.

Fame has made several albums on his own Three Line Whip label since the late 1990s, mostly new original compositions with a jazz/R&B framework.

In 1972, Fame married Nicolette (née Harrison), Marchioness of Londonderry, the former wife of the 9th Marquess. Lady Londonderry already had given birth to one of Fame's children during her marriage to the marquess; the child, Tristan, bore the courtesy title Viscount Castlereagh and was believed to be heir to the marquisate.[23] When tests determined that the child was actually Fame's, the Londonderrys divorced.[24] The couple had another son, James, during their marriage.

Nicolette Powell died on 13 August 1993, after jumping off the Clifton Suspension Bridge.[25] In an interview prior to her death, Fame said that they had stayed happily married because of her "charm, beauty, forbearance and understanding".[2]

Fame is a supporter of the Countryside Alliance and has played concerts to raise funds for the organisation.[26]

This article uses material from the article Georgie Fame from the free encyclopedia Wikipedia and it is licensed under the GNU Free Documentation License.