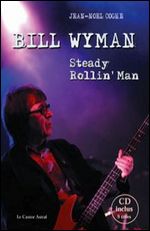 Bill Wyman (born William George Perks Jr., 24 October 1936) is an English musician, record producer, songwriter and singer. He was the bass guitarist for the English rock and roll band the Rolling Stones from 1962 until 1993. Since 1997 he has recorded and toured with his own band, Bill Wyman's Rhythm Kings. He has worked producing records and films, and has scored music for film in movies and television.

Wyman has kept a journal since he was a child after World War II. As an author, he has written seven books. Wyman is also a photographer, and his works have been displayed in galleries around the world.[1] In 1961 Wyman heavily modified an inexpensive, second hand Dallas Tuxedo bass to create his own fretless bass guitar. He became an amateur archaeologist and enjoys metal detecting; The Times published a letter about his hobby. He designed and marketed a patented "Bill Wyman signature metal detector", which he has used to find relics in the English countryside dating back to the era of the Roman Empire.

As a businessman he owns several establishments including the popular Sticky Fingers Café, a rock and roll-themed bistro serving American cuisine which first opened in 1989 in Kensington, London.

Wyman was born as William George Perks Jr. in Lewisham Hospital in Lewisham, south London, the son of Molly (née Jeffery) and William Perks, a bricklayer. One of five children, Wyman spent most of his early life living in a terraced house in one of the roughest streets in Penge, southeast London. He describes his childhood as "scarred by poverty".[2]

He attended Beckenham and Penge County Grammar School from 1947 to Easter 1953, leaving before the GCE exams after his father found him a job working for a bookmaker and insisted that he take it.[3][4]

Wyman took piano lessons from age 10 to 13. A year after his marriage on 24 October 1959 to Diane Cory, an 18-year-old bank clerk, he bought a Burns electric guitar for £52 (equivalent to £1,099 in 2016[5]) on hire-purchase, but was not satisfied by his progress.[6] He switched to bass guitar after hearing one at a Barron Knights concert. He created a fretless electric bass guitar[7] by filing down or removing the frets on a cheap UK-built Dallas Tuxedo bass[8][9] and played this in a south London band, the Cliftons, in 1961.

He used the stage name Lee Wyman (later Bill Wyman), taking the surname of a friend with whom he had done national service in the Royal Air Force from 1955 to 1957.[10] He legally changed his surname to Wyman in August 1964.[11]

The Rolling Stones and 1980s side projects

When drummer Tony Chapman told him that a rhythm and blues band called the Rolling Stones needed a bass player, he auditioned and was hired on 7 December 1962 as a successor to Dick Taylor. The band was impressed by his instrument and amplifiers (one of which Wyman modified himself).[12] Wyman was the oldest member of the group.[11]

In addition to playing bass, Wyman frequently provided backing vocals on early records, and through 1967, in concert as well. He sang lead on the track "In Another Land", on the Their Satanic Majesties Request album and a single. The song is one of two Wyman compositions released by the Rolling Stones; the second is "Downtown Suzie" (sung by Mick Jagger), on Metamorphosis, a collection of Rolling Stones outtakes. The title "Downtown Suzie" was chosen by their erstwhile manager Allen Klein without consulting Wyman or the band. The original title was "Sweet Lisle Lucy", named after Lisle Street, a street in the red light district in Soho, London.

Wyman has kept a journal throughout his life, beginning when he was a child, and used it in writing his 1990 autobiography Stone Alone and his 2002 book Rolling with the Stones. In Stone Alone, Wyman claims to have composed the riff of "Jumpin' Jack Flash" with Brian Jones and drummer Charlie Watts. Wyman mentions that "(I Can't Get No) Satisfaction" was released as a single only after a 3–2 vote within the band: Wyman, Watts and Jones voted for, Jagger and Keith Richards against, feeling it not sufficiently commercial. In the 1970s and early 1980s he made three solo albums, none commercially very successful but all well received by critics. In July 1981 his "(Si Si) Je Suis un Rock Star" became a top-20 hit in many countries.[13]

In 1981 Wyman composed the soundtrack album Green Ice for the Ryan O'Neal/Omar Sharif film of the same name.

In 1985, he was approached by producers working on a movie based on the Vietnam War, who asked him to provide the theme tune. He completed a demo cover version of the 1969 song "Spirit in the Sky" and sent it off to them for review. The producers' feedback was highly positive, but they soon ran out of money and had to scrap the project. The demo tape was apparently lost, but on an audio CD included with Bill Wyman's Scrapbook in 2013, he says that "somebody out there must have heard it because four months later – in the June of that year – Doctor and the Medics appeared with the release of their version of that song which eventually went to number one for three weeks. A coincidence perhaps? Still, such is life."

He made a cameo appearance in the 1987 film Eat the Rich. He produced and played on a few albums of the group Tucky Buzzard.[14]

Wyman was close to Brian Jones; he and Jones usually shared rooms together while they were on tour and often went to clubs together. He and Jones hung out together even when Jones was distancing himself from the band. Wyman was distraught when he heard the news of Jones' death, being one of two members besides Watts to attend Jones' funeral in July 1969. Wyman was also friends with guitarist Mick Taylor. Like the other Rolling Stones, he has worked with Taylor since Taylor's departure from the band in 1974.

After the Rolling Stones' 1989–90 Steel Wheels/Urban Jungle Tours, Wyman left the group; his decision was announced in January 1993.[15] The Rolling Stones have continued to record and tour with Darryl Jones on bass.

On 24 October 2012, the Stones announced that Wyman and Mick Taylor were expected to join them on stage at the upcoming shows in London (25 and 29 November) and Newark (13 and 15 December). Richards went on to say that the pair would strictly be guests, and Darryl Jones would continue to supply the bass for the majority of the show. He said, "Darryl doesn't get enough recognition. He and Bill can talk about songs they want to step in and out of."[16] [17] At the first London show on 25 November, Wyman played on two back-to-back tracks: "It's Only Rock 'n Roll" and "Honky Tonk Women". He later stated that he was not interested in joining the band for further tour dates in 2013.[18]

On 10 December 2007, Wyman and his band appeared alongside a reunited Led Zeppelin at the Ahmet Ertegun Tribute Concert at the O2 in London.

Wyman was a judge for the 5th annual Independent Music Awards to support independent artists' careers.[20]

In 2009, ex-Rolling Stones guitarist Mick Taylor was invited as a guest performer with Wyman's Rhythm Kings.

Wyman's bass sound came not only from his 30” short scale fretless bass (the so-called “homemade” bass; actually a modified Dallas Tuxedo bass), but the "walking bass" style he adopted, inspired by Willie Dixon and Ricky Fenson. Wyman has played a number of basses, nearly all short scale, including a Framus Star bass and a number of other Framus basses,[23][24] a Vox Teardrop bass (issued as a Bill Wyman signature model), a Fender Mustang Bass, two Ampeg Dan Armstrong basses, a Gibson EB-3, and a Travis Bean bass. Since the late 1980s, Wyman has primarily played Steinberger basses. In 2011 ‘The Bass Centre’ in London issued the ‘’’Wyman Bass’’’, a fretted interpretation of Wyman’s first “homemade” fretless bass, played and endorsed by Wyman.[25]

Wyman's amplifiers over the years have included a Vox T-60, a piggyback Fender Bassman, a Hiwatt bass stack, and an Ampeg SVT. Wyman, especially in the early Stones' years, had a distinctive way of holding his bass – almost vertically. He stated that the reason he held a bass in that position was because his hands and arms are small.

Wyman, although moderate in his use of alcohol and drugs, has stated that he became "girl mad" as a psychological crutch.[26] The June 2006 issue of Maxim magazine ranked Wyman at number 10 on its "Living Sex Legends" list, as he is reputed to have had sex with over 1,000 women.

On 2 June 1989, aged 52, Wyman married 18-year-old Mandy Smith, whom he had been dating since she was 13 and he was 47 years old. According to Smith, their relationship was sexually consummated when she was 14 years old.[28] Their relationship was the subject of considerable media attention. The marriage ended in spring 1991, although the divorce was not finalised until 1993.[29]

Wyman lives in Gedding Hall, a country house near Bury St Edmunds in Suffolk[31] and in St Paul de Vence in the South of France; in St. Paul de Vence his friends include numerous artists. He is a cricket supporter and played in a celebrity match at the Oval against a former England XI, taking a hat-trick.[32][33] He is a lifelong Crystal Palace FC fan. When on a European tour with the Rolling Stones, he feigned toothache and said he needed to travel back to London to see a dentist, in fact he went to watch Palace at Wembley in the 1990 FA Cup Final.[34]

Wyman is a keen photographer. He has taken photographs throughout his career and in June 2010 launched a retrospective of his work in an exhibition in St Paul de Vence. The exhibition included images of his music acquaintances as well as famous artists from the South of France including Marc Chagall.[38]

In March 2016, it was announced that Wyman had been diagnosed with prostate cancer and was expected to make a full recovery.[40]

Wyman is namechecked in the 1986 Smithereens song "Behind the Wall of Sleep".[41]

Bill Wyman has authored or co-authored the following titles:

The last three books and Bill Wyman's Treasure Islands were all written in collaboration with Richard Havers.

This article uses material from the article Bill Wyman from the free encyclopedia Wikipedia and it is licensed under the GNU Free Documentation License.