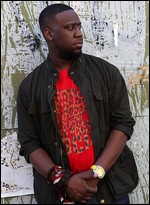 Glasper's earliest musical influence was his mother, Kim Yvette Glasper, who sang jazz and blues professionally. She took him with her to club dates rather than leave her son with babysitters. She also performed in church where the young Glasper began playing piano, and performed during services at three churches: Baptist, Catholic and Seventh-day Adventist. Glasper has said that he first developed his sound in church, where he learned his own way to hear harmony, and was inspired to mix church and gospel harmonies with jazz harmonies.

Glasper attended Elkins High School in Sugarland, Texas and the High School for the Performing and Visual Arts and went on to attend the New School for Jazz and Contemporary Music in New York City. At the New School, Glasper met neo-soul singer Bilal Oliver. They began performing and recording together, which led to associations with a variety of hip-hop and R&B artists parallel to Glasper's emerging jazz career. He has worked with Bilal and Mos Def as musical director, Q-Tip (The Renaissance), Kanye West (Late Registration), Meshell Ndegeocello (The World Has Made Me the Man of My Dreams), J Dilla, Erykah Badu, Jay-Z, Talib Kweli, Common, Slum Village and Maxwell, with whom he toured extensively on 2009s BLACKsummers'night tour.

Glasper's first album, Mood, was released by Fresh Sound New Talent in 2004, after the pianist's stints playing in bands with guitarists Russell Malone and Mark Whitfield, bassist Christian McBride, and trumpeters Terence Blanchard and Roy Hargrove. The album features six original compositions by Glasper alongside versions of "Blue Skies", "Alone Together", and Herbie Hancock's "Maiden Voyage", featuring guest vocalist Bilal. Glasper has said that his arrangement of the Hancock tune was inspired by the Radiohead song "Everything in Its Right Place".

Blue Note Records released Canvas, Glasper's major-label debut, in 2005. The album features nine original songs and a version of Hancocks "Riot". Glasper plays the Fender Rhodes on three tracks, and Bilal sings on two. In My Element, released in 2006, includes songs written in honor of Glasper's mother ("Tribute") and hip-hop producer J Dilla ("J Dillalude"). The pianist also revisits Hancock's "Maiden Voyage", which segues into a version of "Everything in Its Right Place", and quotes Duke Ellingtons "Fleurette Africaine".

Glasper's 2009 album Double-Booked is divided between songs performed by Glasper in an acoustic piano trio and funk-influenced tracks played on electric instruments, such as the Fender Rhodes electric piano and the vocoder (used on a version of Hancock's "Butterfly"). The album features voice mail recordings from Blanchard and Roots drummer Questlove, and guest vocals and spoken word appearances by Bilal and Mos Def. Bilal received a 2010 Grammy Award nomination for Best Urban/Alternative Performance for the track "All Matter".

Glasper has performed at jazz festivals throughout the world, and his trio performed at the 2007 Bonnaroo Music Festival as part of Blue Note's "Somethin' Else" jazz tent. In addition to his working trio (Chris Dave, drums; Vicente Archer, bass), he also leads the Robert Glasper Experiment (Derrick Hodge, Mark Colenburg, and Casey Benjamin), in which he explores fusions of jazz and hip hop.

On February 28, 2012, Glasper released Black Radio, which featured performances by many neo-soul and hip hop artists including Lupe Fiasco, Bilal, Lalah Hathaway and Yasiin Bey. This synthesis of hip hop and jazz is supposedly Glasper's attempt to correct what he sees as a lack of new energy in the jazz genre. In the April 2012 issue of Down Beat, Glasper stated that "I've gotten bored with jazz to the point where I wouldn't mind something bad happening. Slapping hurts, but at some point it'll wake you up. I feel like jazz needs a big-ass slap." On November 5, 2012, Black Radio Recovered: The Remix EP was released with five remixed tracks from the prior album.

On October 29, 2013 Glasper released Black Radio 2, with Fiasco and Hathaway returning from the prior album (Bilal is featured on a bonus track in the Deluxe Edition).[1] Like the prior album, the band performed with a cross-section of R&B, Neo-soul, and Hip-hop artists, with some tracks having a segue at the end to reprise the prior song or introduce the next track.

Glasper's albums are centered around his work as a solo artist, and two bands: The Robert Glasper Trio (on piano Robert Glasper, drummer Chris Dave, and bassist Vicente Archer) as an acoustic jazz trio, and The Robert Glasper Experiment (Glasper, Dave, saxophonist/vocalist Casey Benjamin and bassist Derrick Hodge) as an electronic act that defies genre norms from any single discipline. Thats what makes this band unique... We can go anywhere, literally anywhere, we want to go. We all have musical ADD and we love it.[2] With primary influences in neo-soul, hip-hop, jazz, gospel, and R&B, Glasper also has reinterpreted songs from rock acts Nirvana, Radiohead, Soundgarden, and David Bowie.[3] As a jazz artist, Rashod D. Ollison reviewed him after the release of Canvas as "a gifted jazz musician with a brilliant, energetic technique and a fresh, mesmerizing sense of melody and composition.".[4]

This article uses material from the article Robert Glasper from the free encyclopedia Wikipedia and it is licensed under the GNU Free Documentation License.

The Things We Did Last Summer Winard Harper Sextet
Update Required To play the media you will need to either update your browser to a recent version or update your Flash plugin.