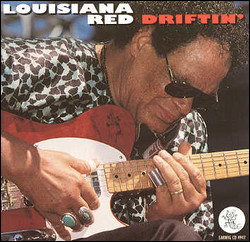 Iverson Minter (March 23, 1932 February 25, 2012), known as "Louisiana Red", was an African American blues guitarist, harmonica player, and singer, who recorded more than 50 albums. He was best known for his song "Sweet Blood Call".[1]

Born in Bessemer, Alabama,[1] Minter lost his parents early in life; his mother died of pneumonia shortly after his birth, and his father was lynched by the Ku Klux Klan in 1937.[2] He was brought up by a series of relatives in various towns and cities. Red recorded for Chess in 1949, before joining the Army. He was initially trained with the 82nd Airborne as a parachutist and he went to Korea in 1951. The 82nd airborne didn't go there as a complete unit, only some of soldiers were dispatched and became rangers in 2nd, 3rd and 7th Infantry Divisions. Red said he was assigned to the 3rd Infantry Division.

After leaving the Army, he spent two years in the late 1950s playing with John Lee Hooker in Detroit.[2] He recorded for Checker Records in 1952, billed as Rocky Fuller.[3]

His first album, Lowdown Back Porch Blues, was recorded in New York with Tommy Tucker and released in 1963, with second album Seventh Son released later the same year.[4] Louisiana Red released the single "I'm Too Poor To Die" for the Glover label in 1964. It peaked at number 117 on the US Billboard Hot 100, and number 30 on the Cashbox chart. Billboard did not print a standard R&B chart during 1964.

He maintained a busy recording and performing schedule through the 1960s and 1970s, having done sessions for Chess, Checker, Atlas, Glover, Roulette, L&R and Tomato amongst others.[2] In 1983 he won a W.C. Handy Award for Best Traditional Blues Male Artist.[5][6] He lived in Hanover, Germany since 1981.[7]

In 1994, Louisiana Red fused the blues with the urban Greek music of the bouzouki player, Stelios Vamvakaris, on the album, Blues Meets Rembetika.[3] He continued to tour, including regular returns to the US,[6] until his death. In 2011, Louisiana Red released Memphis Mojo to broad public acclaim.[9]

Michael Messer, from Michael Messer Music, noted on February 25, 2012: "I am very sorry to be bringer of such sad news that my dear friend, Louisiana Red, died this morning. He had a stroke on Monday and had been in a coma."[10] Louisiana Red had died in Hanover, Germany, aged 79.[1]

This article uses material from the article Louisiana Red from the free encyclopedia Wikipedia and it is licensed under the GNU Free Documentation License.