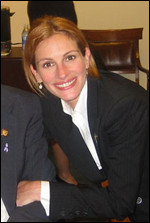 Not to be confused with Julie Roberts.

Julia Fiona Roberts (born October 28, 1967) is an American actress. She became a Hollywood star after headlining the 1990 romantic comedy Pretty Woman, which grossed $464 million worldwide. After receiving Academy Award nominations for Steel Magnolias in 1990 and Pretty Woman in 1991, she won the Academy Award for Best Actress in 2001 for her performance in Erin Brockovich. Her films My Best Friend's Wedding, Mystic Pizza, Notting Hill, Runaway Bride, Valentine's Day, The Pelican Brief, Ocean's Eleven and Twelve have collectively brought box office receipts of over $2.4 billion, making her one of the most successful actors in terms of box office receipts.[1]

Roberts was the first actress to appear on the cover of Vogue. She has been named one of People magazine's "50 Most Beautiful People in the World" eleven times, tied with Halle Berry. In 2001, Ladies Home Journal ranked her as the 11th most powerful woman in America, ahead of then national security advisor Condoleezza Rice and first lady Laura Bush.[3] Roberts has a production company called Red Om Films, formerly Shoelace Productions ("Moder" spelled backwards, after her husband's last name).

Roberts was born in Atlanta, Georgia at Crawford Long Hospital (now Emory University Hospital Midtown), the daughter of Betty Lou (née Bredemus) and Walter Grady Roberts.[4][5] Her parents were Baptist and Catholic.[6] Her older brother, Eric Roberts (from whom she was once estranged, but reconciled with in 2004), and sister, Lisa Roberts Gillan, are also actors. Roberts' parents, one-time actors and playwrights, met while performing theatrical productions for the armed forces and later co-founded the Atlanta Actors and Writers Workshop in Atlanta, Georgia, off Juniper Street in Midtown. While her mother was pregnant with Julia, she and her husband ran an acting school for children in Decatur, Georgia. The children of Martin Luther King, Jr. and Coretta Scott King attended the school. As a thank-you for their service, Mrs. King paid the hospital bill when Roberts' mother gave birth to Julia.[7]

Roberts' mother filed for divorce in 1971, with the divorce being finalized early in 1972.[8] The family moved to Smyrna, Georgia (a suburb of Atlanta) in 1972, where Roberts attended Fitzhugh Lee Elementary School, Griffin Middle School and Campbell High School.[9] Her mother re-married to Michael Motes and had another daughter, Nancy Motes, who was born in 1976. Roberts' father died of cancer when she was ten.

In school, Roberts played clarinet in the band. She wanted to be a veterinarian as a child. After graduating from Smyrna's Campbell High School, she headed to New York to join her brother and sister Lisa Roberts Gillan and pursue a career in acting. Once there, she signed with the Click modeling agency and enrolled in acting classes. She reverted to her original name "Julia Roberts" when she discovered that a "Julie Roberts" was already registered with the Screen Actors Guild. Her niece Emma Roberts, whom Julia used to take to movie sets when she was a young girl, has joined her father and aunts in the acting business.

Roberts made her first big screen appearance in the film Satisfaction, released on February 12, 1988. She had previously performed a small role opposite her brother, Eric, in Blood Red (she has just two words of dialogue), filmed in 1987 and released in 1989. Her first television appearance was as a juvenile rape victim in the initial season of the series Crime Story with Dennis Farina, in the episode titled "The Survivor", broadcast on February 13, 1987. Her first critical success with moviegoers was her performance in the independent film Mystic Pizza in 1988; that same year, she had a role in the fourth season finale of Miami Vice. The following year, she was featured in Steel Magnolias as a young bride with diabetes and got her first Academy Award nomination (as Best Supporting Actress) for her performance.

Roberts became known to worldwide audiences when she co-starred with Richard Gere in the Cinderella/Pygmalionesque story Pretty Woman in 1990. Roberts won the role after the first three choices for the part, Molly Ringwald, Meg Ryan and Daryl Hannah (her co-star in Steel Magnolias), all turned it down. The role also earned her a second Oscar nomination, this time as Best Actress. Her next box office success was the thriller Sleeping with the Enemy, playing a battered wife who escapes her demented husband, played by Patrick Bergin, and begins a new life in Iowa. She played Tinkerbell in Steven Spielberg's Hook in 1991, and also played a nurse in the 1991 film Dying Young. This work was followed by a two-year hiatus, during which she made no films other than a cameo appearance in Robert Altman's The Player (1992). In early 1993, she was the subject of a People magazine cover story asking, "What Happened to Julia Roberts?"[1]

In 1993, she co-starred with Denzel Washington in The Pelican Brief, based on the John Grisham novel. She also starred alongside Liam Neeson in the 1996 film Michael Collins. In 1995, she appeared in season 2 of Friends (episode 13 "The One After the Superbowl").

Over the next few years, she starred in a series of films that were critical and commercial failures, such as Stephen Frears' Mary Reilly (1996). Roberts overcame these failures with the commercial and critical success of My Best Friend's Wedding in 1997. In 1998, she appeared on Sesame Street opposite the character Elmo, demonstrating her ability to change emotions. She starred with Hugh Grant in the 1999 film Notting Hill. That same year, she also starred in Runaway Bride, her second film with Richard Gere. Roberts was a guest star on the Law & Order television series episode "Empire" with series regular Benjamin Bratt (at that time her boyfriend). Also in 1999, she starred in the critically panned film Stepmom alongside Susan Sarandon.[10]

In 2001, Roberts received the Academy Award for Best Actress for her portrayal of Erin Brockovich, who helped wage a successful lawsuit against energy giant Pacific Gas & Electric. While presenting the Best Actor Award to Denzel Washington the following year, she made a gaffe, saying she was glad that Tom Conti wasn't there. She meant the conductor Bill Conti, who had tried to hasten the conclusion of her Oscar speech the previous year, but instead named the Scottish actor.[11] Roberts would team up with Erin Brockovich director Steven Soderbergh for three more films: Ocean's Eleven (2001), Full Frontal (2002), and Ocean's Twelve (2004). Later in 2001, she starred in the road gangster comedy The Mexican giving her a chance to work with longtime friend Brad Pitt. In 2005, she was featured in the music video for the hit single "Dreamgirl" by the Dave Matthews Band.

Roberts had two films released in 2006, The Ant Bully and Charlotte's Web. Both films were animated features for which she provided voice acting. Her next film was Charlie Wilson's War, with Tom Hanks and Philip Seymour Hoffman, directed by Mike Nichols and based on the book by former CBS journalist George Crile; it was released on December 21, 2007. Fireflies in the Garden, also starring Ryan Reynolds and Willem Dafoe, was released at the Berlin International Film Festival in February 2008.

Roberts made her Broadway debut on April 19, 2006 as Nan in a revival of Richard Greenberg's 1997 play Three Days of Rain opposite Bradley Cooper and Paul Rudd. Although the play grossed nearly US$1 million dollars in ticket sales during its first week[12] and was a commercial success throughout its limited run, her performance drew criticism. New York Times' critic Ben Brantly described her as being fraught with "self-consciousness (especially in the first act) [and] only glancingly acquainted with the two characters she plays."[13] Brantley also criticized the production of "Greenberg's slender, elegant play," writing that it's almost impossible to discern its artistic virtues from this wooden and splintered interpretation, directed by Joe Mantello."[13] Three Days of Rain received two Tony Award nominations in stage design categories. In 2009, Lancôme announced that Julia Roberts will become their global ambassador for their company.[14] Roberts starred with Clive Owen in the comedy-thriller Duplicity for which she received her seventh Golden Globe nomination. In 2010, she appeared in the ensemble romantic comedy Valentine's Day, with Bradley Cooper, and starred in the film adaptation of Eat Pray Love.

Eat Pray Love had the highest debut at the box office for Roberts in a top-billed role since America's Sweethearts.[15]

Roberts has brought to life some of the books from American Girl as films, serving as executive producer alongside her sister Lisa. The company's product lines and services are focused on pre-teen-girl characters from various periods of American history, embodied as dolls and featured in narratives including books and movies. Roberts has produced four movies.[16]

Roberts's personal life has been in the spotlight. She has had reported romantic relationships with numerous famous men, including Liam Neeson, Dylan McDermott, Kiefer Sutherland, Lyle Lovett, Matthew Perry, and Benjamin Bratt. She was briefly engaged to McDermott, her Steel Magnolias co-star. She met Sutherland in 1990, when he was her co-star in Flatliners. In August 1990, Roberts and Sutherland announced their engagement, with an elaborate studio-planned wedding scheduled for June 14, 1991. Roberts broke the engagement three days before the wedding. Roberts subsequently went to Ireland with Jason Patric, a friend of Sutherland's.[17] On June 27, 1993, she married country singer Lyle Lovett. The wedding took place at St. James Lutheran Church in Marion, Indiana, near where Lovett was appearing on tour with his band.[18] In March 1995, the couple separated, and subsequently divorced.[19]

In 1998, Roberts began dating Law & Order star Benjamin Bratt, and he was her escort for the March 25, 2001 Academy Awards ceremony at which she won her Oscar. Three months later, in June 2001, Roberts and Bratt announced that they were no longer a couple. "It's come to a kind and tenderhearted end," she said of their relationship.[20]

Roberts met her current husband, cameraman Daniel Moder, on the set of her movie The Mexican in 2001. At the time, Moder was married to Vera Steimberg Moder. He filed for divorce a little over a year later, and after it was finalized, he and Roberts wed on July 4, 2002, at her ranch in Taos, New Mexico.[21] Together, they have three children, twins Hazel Patricia Moder and Phinnaeus "Finn" Walter Moder (born November 28, 2004) and Henry Daniel Moder (born June 18, 2007).[22]

Roberts has given her time and resources to UNICEF as well as to other charitable organizations. On May 10, 1995, Roberts arrived in Port-au-Prince, as she said, "to educate myself".[27][28] The poverty she found was overwhelming. "My heart is just bursting", she said.[27] UNICEF officials hoped that her six-day visit would trigger an outburst of giving: $10 million in aid was sought at the time.[27][28]

In 2000, Roberts narrated Silent Angels, a documentary about Rett syndrome, a neurodevelopmental disorder, which was shot in Los Angeles, Baltimore and New York. The documentary was designed to help raise public awareness about the disease. In July 2006, Earth Biofuels announced Roberts as a spokeswoman for the company and as chair of the company's newly formed Advisory Board promoting the use of renewable fuels.

This article uses material from the article Julia Roberts from the free encyclopedia Wikipedia and it is licensed under the GNU Free Documentation License.