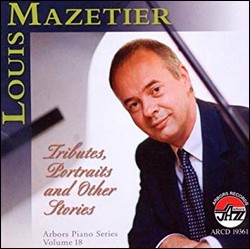 Mazetier began playing jazz at age 14 and by age 18 was taking gigs at jazz clubs in Paris. In addition to his career as a musician, Dr. Mazetier works full time as a radiologist.[1] He plays with Paris Washboard and has worked on record with Dick Hyman, Francois Rilhac, Alain Marquet, and Neville Dickie, among others, and has released multiple albums as a leader or co-leader, for those companies listed below, as well as the Swiss, Jazz Connoisseur label. Although Dr. Mazetier is influenced by earlier jazz pianists, such as Eubie Blake, James P. Johnson, Fats Waller, Don Ewell, Johnny Guarnieri, Dick Wellstood, and Art Tatum, his greatest influence appears to be the American stride pianist, Donald Lambert, 1904 - 1962.

This article uses material from the article Louis Mazetier from the free encyclopedia Wikipedia and it is licensed under the GNU Free Documentation License.