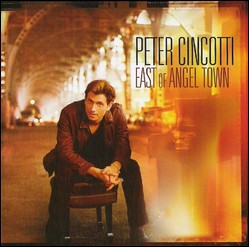 Peter Cincotti (born July 11, 1983) is an American singer-songwriter. He began playing piano at the age of three. While in high school, he regularly performed in clubs throughout Manhattan. In 2003, Cincotti's debut album, produced by Phil Ramone, reached No. 1 on the Billboard jazz chart, making Cincotti the youngest musician to do so. This led to performances at Carnegie Hall, Lincoln Center, Radio City Music Hall, L'Olympia, Queen Elizabeth Hall, and the Montreux Jazz Festival where he won an award in the piano competition. Cincotti's style blends pop, rock, blues, and jazz.

Born in New York City in an Italian-American family,[1] from Cervinara, a little town in province of Avellino where he is honorary citizen.[2] Cincotti started playing a toy piano at the age of three. While in high school, he regularly performed at clubs throughout Manhattan and performed at the White House. At the 2000 Montreux Jazz Festival, he won an award for a rendition of Dizzy Gillespie's "A Night in Tunisia." In 2002, he reached No. 1 on the Billboard Traditional jazz Charts, the youngest solo artist to do so to date.

Cincotti appeared in a small role in the 2004 Bobby Darin biopic Beyond the Sea and contributed to the film's soundtrack. He also had a small role as the Piano Player in the Hayden Planetarium in Spider-Man 2. His song "December Boys" is featured in the 2007 film December Boys, starring Daniel Radcliffe. He appeared as himself in the third season of the Netflix series House of Cards.

His self-titled debut album is a compilation of traditional jazz songs, while his second album, On the Moon, featured some of the artist's own songs. Combining elements of pop, jazz, funk and, rock, his third studio album, East of Angel Town, features all original works by the artist and was released in 2007 in Europe and in January 2009 in the United States.

This project began when Cincotti teamed up with 16-time Grammy Award winning producer David Foster (who signed him to a new contract on his Reprise/Warner Bros.-distributed 143 Records), producer Humberto Gatica, and producer/sound designer Jochem van der Saag. He toured the world promoting the album with his hit single "Goodbye Philadelphia" and later joined recording artist Seal on tour in the U.S.

In 2008, Peter collaborated with French DJ/producer David Guetta and they appeared together on the finale of Star Academy performing a new version of the song Love Is Gone.

In July 2012, Peter and his sister Pia Cincotti wrote and produced an original full length musical entitled "How Deep Is the Ocean?" (music and lyrics by Peter Cincotti, and book by Pia Cincotti), which debuted at the New York Musical Theatre Festival to sold out audiences in New York.

In 2013 he participated in the Festival of Sanremo, singing the song with Simona Molinari: La Felicità (The Happiness). Later that year, Cincotti was named the first male ambassador for Italian luxury designer Tods and collaborated with the brand on the music video for his single "Madeline", a project exclusively featured in Italy's issue of Vanity Fair.

In 2014 Cincotti wrote, arranged and produced the soundtrack for the Italian film Le Leggi Del Desiderio (Laws of Desire), directed by Silvio Muccino.

Cincotti appeared as himself in Season 3 (2015) of the Netflix series House of Cards, singing a duet with President Francis Underwood (played by Kevin Spacey). In April 2015 he performed with Sting and Annie Lennox at The Old Vic Gala in a tribute to Kevin.

Peter is a Dramatists Guild of America musical theater fellow and part of the Johnny Mercer Writing Colony at Goodspeed Musicals writing a new musical with his sister Pia.

This article uses material from the article Peter Cincotti from the free encyclopedia Wikipedia and it is licensed under the GNU Free Documentation License.

The Sweet Alice Blues George Benson & Jack McDuff Quartet
Update Required To play the media you will need to either update your browser to a recent version or update your Flash plugin.