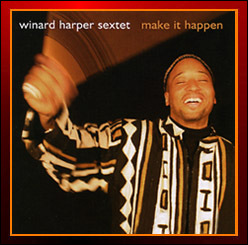 Harper played in the 1980s with Dexter Gordon, Johnny Griffin, and Betty Carter, the last for four years. While working with Carter he met Wycliffe Gordon, with whom he would collaborate repeatedly. From 1988 to 1993 he worked with his brother, trumpeter Philip Harper, in the group The Harper Brothers, alongside musicians such as Justin Robinson, Javon Jackson, Walter Blanding, Kiyoshi Kitagawa, Stephen Scott, Kevin Hays, Michael Bowie, and Nedra Wheeler. After the dissolution of the Harper brothers, Winard went on to record several albums as a leader. In the early 2000s he worked with his own sextet, including for performances at Lincoln Center in New York City.[1] He played with Avery Sharpe in 2008.[2]

This article uses material from the article Winard Harper from the free encyclopedia Wikipedia and it is licensed under the GNU Free Documentation License.

As Time Goes By Exciting Jazz Crew
Update Required To play the media you will need to either update your browser to a recent version or update your Flash plugin.