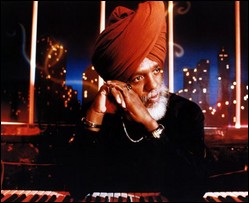 Not to be confused with Lonnie Liston Smith.

He was born in Lackawanna, New York,[1] into a family with a vocal group and radio program. Smith says that his mother was a major influence on him musically, as she introduced him to gospel, classical, and jazz music. He was part of several vocal ensembles in the 1950s, including the Teen Kings. Art Kubera, the owner of a local music store, gave Smith his first organ, a Hammond B3.[2]

Smith's affinity for R&B melded with his own personal style as he became active in the local music scene. He moved to New York City, where he met George Benson, the guitarist for Jack McDuff's band. Benson and Smith connected on a personal level, and the two formed the George Benson Quartet, featuring Lonnie Smith, in 1966.

After two albums under Benson's leadership, It's Uptown and Cookbook, Smith recorded his first solo album (Finger Lickin' Good) in 1967, with George Benson and Melvin Sparks on guitar, Ronnie Cuber on baritone sax, and Marion Booker on drums. This combination remained stable for the next five years.

After recording several albums with Benson, Smith became a solo recording artist and has since recorded over 30 albums under his own name. Numerous prominent jazz artists have joined Smith on his albums and in his live performances, including Lee Morgan, David "Fathead" Newman, King Curtis, Terry Bradds, Blue Mitchell, Joey DeFrancesco and Joe Lovano.[2]

In 1967, Smith met Lou Donaldson, who put him in contact with Blue Note Records. Donaldson asked the quartet to record an album for Blue Note, Alligator Bogaloo. Blue Note signed Smith for the next four albums, all in the soul jazz style, including Think (with Melvin Sparks, Marion Booker, Lee Morgan and David Newman) and Turning Point (with Lee Morgan, Bennie Maupin, Melvin Sparks and Idris Muhammad).

Smith's next album Move Your Hand was recorded at the Club Harlem in Atlantic City, New Jersey, in August 1969. The album's reception allowed his reputation to grow beyond the Northeast. He recorded another studio album, Drives, and one more live album, Live at Club Mozambique (recorded in Detroit on May 21, 1970), before leaving Blue Note.

Smith also plays for college universities across the nation.

In the mid-1970s, Smith became known as "Dr. Lonnie Smith" although the honorific does not represent an academic doctorate degree. His beard and turban do not reflect a conversion to Sikhism; they are strictly for stylistic reasons.[4]

This article uses material from the article Lonnie Smith (jazz musician) from the free encyclopedia Wikipedia and it is licensed under the GNU Free Documentation License.

Thank You Pretty Baby Eddie J. Wolf & His Rhythm Pack
Update Required To play the media you will need to either update your browser to a recent version or update your Flash plugin.