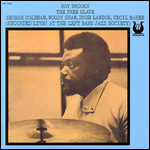 Brooks was born in Detroit and drummed since childhood, his earliest experiences of music coming through his mother, who sang in church.[1] He was an outstanding varsity basketball player as a teenager and was offered a scholarship to the Detroit Institute of Technology; he attended the school for three semesters and then dropped out to tour with Yusef Lateef.[2]

After time with Lateef and Barry Harris, he played with Beans Bowles and with the Four Tops in Las Vegas.[3] He played with Horace Silver from 1959 to 1964, including on the album Song for My Father; in 1963 he released his first album as a leader. Following this he freelanced in New York City through the 1960s and early 1970s, playing with Lateef again (1967–70), Sonny Stitt, Lee Morgan, Dexter Gordon, Chet Baker, Junior Cook, Blue Mitchell, Charles McPherson, Pharoah Sanders (1970), Wes Montgomery, Dollar Brand, Jackie McLean, James Moody (1970–72), Charles Mingus (1972–73), and Milt Jackson. He married Hermine Brooks in 1967.[4] His 1970 album The Free Slave featured Cecil McBee and Woody Shaw. Later in 1970 he joined Max Roach's ensemble M'Boom, and in 1972 put together the ensemble The Artistic Truth.

Brooks's performances often included unusual instruments such as the musical saw and drums with vacuum tubes set up so as to regulate the pitch.[2] He began to acquire a reputation for bizarre behavior on and off stage, and occasionally sought treatment for mental disorders.[2][4] In 1975 he left New York and returned to Detroit, and began using lithium to regulate his behavior.[2] In the 1980s he returned to The Artistic Truth and gigged regularly in Detroit with Kenny Cox, Harold McKinney, and Wendell Harrison. With those three he co-founded M.U.S.I.C. (Musicians United to Save Indigenous Culture), and later also founded the Aboriginal Percussion Choir, an ensemble devoted to the use of non-Western percussion instruments.[4] He used his basement as a practice and learning space, working with children as well as accomplished musicians.[4]

In the 1990s Detroit's jazz scene waned, and Brooks ceased taking medication; he again began breaking down at gigs, and in 1994 was institutionalized for three weeks.[4] In 1997, he threatened his neighbor with a shotgun during a dispute over a lost set of house keys.[4] He was charged with assault but was declared mentally unfit to stand trial and was sentenced to mental treatment; however, he missed many of his appointments, and in 1999 he threatened another neighbor with a bullwhip and a machete over property rights to an adjacent vacant lot.[4] Sentenced to further psychiatric treatment, he disappeared again, and when probation officers found him, he was imprisoned late in 2000.[4] He served time at Marquette Prison until 2004, when he was placed in a nursing home.[2] He died there late in 2005. Brooks is survived by his wife Hermine and his two sons Raheem Brooks and Richard Elliott Brooks-Pinkston.

With M'Boom / with Max Roach

This article uses material from the article Roy Brooks from the free encyclopedia Wikipedia and it is licensed under the GNU Free Documentation License.

Peel Me A Grape Diana Krall
Update Required To play the media you will need to either update your browser to a recent version or update your Flash plugin.