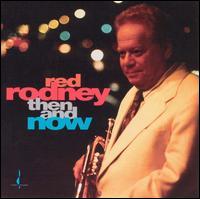 Robert Roland Chudnick (September 27, 1927 – May 27, 1994), who performed under the stage name Red Rodney, was an American bop and hard bop trumpeter.

Born in Philadelphia, PA, he became a professional musician at 15, working in the mid-1940s for Jerry Wald, Jimmy Dorsey, Georgie Auld, Elliott Lawrence, Benny Goodman, and Les Brown. He was inspired by hearing Dizzy Gillespie and Charlie Parker to change his style to bebop, moving on to play with Claude Thornhill, Gene Krupa, and Woody Herman. In 1949 he accepted an invitation from Charlie Parker to join his quintet. As the only white member of the group he was billed as Albino Red when playing in the racially segregated southern United States. In 1950 he joined the Charlie Ventura band. He also recorded extensively.

In 1958 he left jazz because of diminishing opportunities, lack of acceptance as a white bebop trumpeter, and problems with the police about his drug addiction. He continued to work in other musical fields. Although he continued to be paid well, he supported his drug habit through theft and fraud, eventually spending 27 months in prison.

1963 proved to be the deepest challenge; during a run-in with police, a detective hit him in the mouth, loosening several teeth and starting the cycle of dental issues that continued into the 1970s when he made a comeback. In Sept. 1963 his father died and a month later, while his wife was driving him back from a Las Vegas gig, his wife lost control of their car, plunging down an embankment on the Nevada highway. Rodney, asleep in the back seat, awoke to find his wife and 14-yr. old daughter dead.

During 1969, Rodney was in Las Vegas playing alongside his fellow Woody Herman colleague, trombonist Bill Harris, as part of the Flamingo casino house band led by Russ Black. Similar work continued through 1972.

In the early 1970s he was bankrupted by medical costs following a 1972 stroke and returned to jazz. He also managed to give up drugs during the 1970s, although in 1975 he was incarcerated in Kentucky for drug offenses. While jailed he gave music lessons to guitarist Wayne Kramer of the MC 5. He began a slow comeback in 1973.

From 1980 to 1982, Rodney made five highly regarded albums with multi-instrumentalist Ira Sullivan. In these albums he started to play post-bop jazz. He continued to work and record into the 1990s. Most notably, he performed with The Rolling Stones' drummer Charlie Watts who created a tribute to Parker. Rodney provided an early showcase for saxophonist Chris Potter, who was a regular member of his working group and only 19 years old when Rodney recorded "Red Alert" in late 1990.

Rodney's son, (Mark Rodney), was in the acoustic duo, Batdorf and Rodney, and is an accomplished guitarist. Rodney's youngest son, Jeff Rodney, is also known as disc jockey Jammin Jeff and is a musician in his own right.

With the Bob Thiele Collective

This article uses material from the article Red Rodney from the free encyclopedia Wikipedia and it is licensed under the GNU Free Documentation License.

Sunday In New York Mike LeDonne
Update Required To play the media you will need to either update your browser to a recent version or update your Flash plugin.