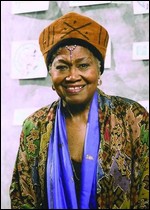 Odetta Holmes (December 31, 1930 – December 2, 2008), known as Odetta, was an American singer, actress, guitarist, lyricist, and a civil and human rights activist, often referred to as "The Voice of the Civil Rights Movement".[1] Her musical repertoire consisted largely of American folk music, blues, jazz, and spirituals. An important figure in the American folk music revival of the 1950s and 1960s, she influenced many of the key figures of the folk-revival of that time, including Bob Dylan, Joan Baez, Mavis Staples, and Janis Joplin. Time magazine included her recording of "Take This Hammer" on its list of the 100 Greatest Popular Songs, stating that "Rosa Parks was her No. 1 fan, and Martin Luther King Jr. called her the queen of American folk music."[2]

Odetta was born in Birmingham, Alabama. She grew up in Los Angeles, where she attended Belmont High School. She then studied music at Los Angeles City College while employed as a domestic worker. She had operatic training from the age of 13. Her mother hoped she would follow Marian Anderson, but Odetta doubted a large black girl would ever perform at the Metropolitan Opera.[3] Her first professional experience was in musical theater in 1944, as an ensemble member for four years with the Hollywood Turnabout Puppet Theatre, working alongside Elsa Lanchester. In 1949, she joined the national touring company of the musical Finian's Rainbow.

While on tour with Finian's Rainbow, Odetta "fell in with an enthusiastic group of young balladeers in San Francisco", and after 1950 she concentrated on folksinging.[4]

She made her name playing at the Blue Angel nightclub in New York City, and the hungry i in San Francisco. At the Tin Angel in 1954, also in San Francisco, Odetta recorded Odetta and Larry with Larry Mohr for Fantasy Records.

A solo career followed, with Odetta Sings Ballads and Blues (1956) and At the Gate of Horn (1957). Odetta Sings Folk Songs was one of the best-selling folk albums of 1963.

In 1961, Martin Luther King, Jr. called her "The Queen of American Folk Music".[6] Also in 1961 the duo Harry Belafonte and Odetta made number 32 in the UK Singles Chart with the song "There's a Hole in the Bucket".[7] She is remembered for her performance at March on Washington, the 1963 civil rights demonstration, at which she sang "O Freedom".[8] She described her role in the civil rights movement as "one of the privates in a very big army."[9]

Broadening her musical scope, Odetta used band arrangements on several albums rather than playing alone. She released music of a more "jazz" style on albums like Odetta and the Blues (1962) and Odetta (1967). She gave a remarkable performance in 1968 at the Woody Guthrie memorial concert.

Odetta acted in several films during this period, including Cinerama Holiday (1955); a cinematic production of William Faulkner's Sanctuary (1961); and The Autobiography of Miss Jane Pittman (1974). In 1961 she appeared in an episode of the TV series Have Gun, Will Travel, playing the wife of a man sentenced to hang ("The Hanging of Aaron Gibbs").

She was married twice, first to Dan Gordon and then, after their divorce, to Gary Shead. Her second marriage also ended in divorce. The blues singer-guitarist Louisiana Red was a former companion of hers.[3]

In May 1975 she appeared on public television's Say Brother program, performing "Give Me Your Hand" in the studio. She spoke about her spirituality, the music tradition from which she drew, and her involvement in civil rights struggles.[10]

In 1976, Odetta performed in the U.S. Bicentennial opera Be Glad Then, America by John La Montaine, as the Muse for America; with Donald Gramm, Richard Lewis and the Penn State University Choir and the Pittsburgh Symphony. The production was directed by Sarah Caldwell who was the director of the Opera Company of Boston at the time.

Beginning in 1998, she returned to recording and touring. The new CD To Ella (recorded live and dedicated to her friend Ella Fitzgerald upon hearing of her death before walking on stage),[11] was released in 1998 on Silverwolf Records, followed by three releases on M.C. Records in partnership with pianist/arranger/producer Seth Farber and record producer Mark Carpentieri. These included Blues Everywhere I Go, a 2000 Grammy-nominated blues/jazz band tribute album to the great lady blues singers of the 1920s and 1930s; Looking for a Home, a 2002 W.C. Handy Award-nominated band tribute to Lead Belly; and the 2007 Grammy-nominated Gonna Let It Shine, a live album of gospel and spiritual songs supported by Seth Farber and The Holmes Brothers. These recordings and active touring led to guest appearance on fourteen new albums by other artists between 1999 and 2006 and the re-release of 45 old Odetta albums and compilation appearances.

On September 29, 1999, President Bill Clinton presented Odetta with the National Endowment for the Arts' National Medal of Arts. In 2004, Odetta was honored at the Kennedy Center with the "Visionary Award" along with a tribute performance by Tracy Chapman. In 2005, the Library of Congress honored her with its "Living Legend Award".

In mid-September 2001, Odetta performed with the Boys' Choir of Harlem on the Late Show with David Letterman, appearing on the first show after Letterman resumed broadcasting, having been off the air for several nights following the events of September 11; they performed "This Little Light of Mine".

The 2005 documentary film No Direction Home, directed by Martin Scorsese, highlights her musical influence on Bob Dylan, the subject of the documentary. The film contains an archive clip of Odetta performing "Waterboy" on TV in 1959, as well as her "Mule Skinner Blues" and "No More Auction Block for Me".

In 2006, Odetta opened shows for jazz vocalist Madeleine Peyroux, and in 2006 she toured the U.S., Canada, and Europe accompanied by her pianist, which included being presented by the U.S. Embassy in Latvia as the keynote speaker at a human rights conference, and also in a concert in Riga's historic 1,000-year-old Maza Guild Hall. In December 2006, the Winnipeg Folk Festival honored Odetta with their "Lifetime Achievement Award". In February 2007, the International Folk Alliance awarded Odetta as "Traditional Folk Artist of the Year".

In 2007, Odetta's album Gonna Let It Shine was nominated for a Grammy, and she completed a major Fall Concert Tour in the "Songs of Spirit" show, which included artists from all over the world. She toured around North America in late 2006 and early 2007 to support this CD.[13]

On January 21, 2008, Odetta was the keynote speaker at San Diego's Martin Luther King, Jr. commemoration, followed by concert performances in San Diego, Santa Barbara, Santa Monica, and Mill Valley, in addition to being the sole guest for the evening on PBS-TV's The Tavis Smiley Show.

Odetta was honored on May 8, 2008 at a historic tribute night,[14] hosted by Wavy Gravy, held at Banjo Jim's in the East Village.

She made an appearance on June 30, 2008, at The Bitter End on Bleecker Street, in New York City for a concert in tribute to Liam Clancy. Her last big concert, before thousands of people, was in San Francisco's Golden Gate Park on October 4, 2008, for the Hardly Strictly Bluegrass Festival.[20] Her last performance was at Hugh's Room in Toronto on October 25.[20]

Odetta influenced Harry Belafonte, who "cited her as a key influence" on his musical career;[20] Bob Dylan, who said, "The first thing that turned me on to folk singing was Odetta. I heard a record of hers Odetta Sings Ballads and Blues in a record store, back when you could listen to records right there in the store. Right then and there, I went out and traded my electric guitar and amplifier for an acoustical guitar, a flat-top Gibson. . . . [That album was] just something vital and personal. I learned all the songs on that record";[26] Joan Baez, who said, "Odetta was a goddess. Her passion moved me. I learned everything she sang";[27] Janis Joplin, who "spent much of her adolescence listening to Odetta, who was also the first person Janis imitated when she started singing";[28] the poet Maya Angelou, who once said, "If only one could be sure that every 50 years a voice and a soul like Odetta's would come along, the centuries would pass so quickly and painlessly we would hardly recognize time";[29] John Waters, whose original screenplay for Hairspray mentions her as an influence on beatniks;[30] and Carly Simon, who cited Odetta as a major influence and told of "going weak in the knees" when she had the opportunity to meet her in Greenwich Village.[31]

This article uses material from the article Odetta from the free encyclopedia Wikipedia and it is licensed under the GNU Free Documentation License.

Basie And Bean Byron Stripling
Update Required To play the media you will need to either update your browser to a recent version or update your Flash plugin.