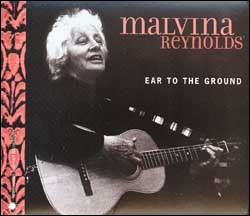 Malvina Milder was born in San Francisco to David and Abagail Milder, Jewish and socialist immigrants, who opposed involvement in World War I.

She married William ("Bud") Reynolds, a carpenter and labor organizer, in 1934. They had one child, Nancy Reynolds Schimmel (a songwriter and performer in her own right), in 1935. She had earned her Bachelor of Arts and Master of Arts in English from the University of California, Berkeley, and later earned a doctorate there, finishing her dissertation in 1938.

Though she played violin in a dance band in her twenties, she began her songwriting career late in life. She was in her late 40s when she met Earl Robinson, Pete Seeger, and other folk singers and songwriters. She returned to school at UC Berkeley, where she studied music theory. She went on to write several popular songs, including "Little Boxes," "What Have They Done to the Rain," recorded by The Searchers and Joan Baez (about nuclear fallout), "It Isn't Nice" (a civil rights anthem), "Turn Around" (about children growing up, later sung by Harry Belafonte), and "There's a Bottom Below" (about depression). Reynolds was also a noted composer of children's songs, including "Magic Penny" (a traditional London folk song during the 1940s) and "Morningtown Ride," a top five UK single (December 1966) recorded by The Seekers.

A film biography, Love It Like a Fool, was made a few years before she died in 1978. Reynolds' most famous song, "Little Boxes" (made famous by Pete Seeger), has enjoyed renewed popularity by being featured in Showtime's TV series Weeds. "Little Boxes" was inspired visually by the houses of Daly City, California. Nancy Reynolds Schimmel, daughter of Malvina Reynolds, explained:

"My mother and father were driving South from San Francisco through Daly City when my mom got the idea for the song. She asked my dad to take the wheel, and she wrote it on the way to the gathering in La Honda where she was going to sing for the Friends Committee on Legislation. When Time Magazine (I think, maybe Newsweek) wanted a photo of her pointing to the very place, she couldn't find those houses because so many more had been built around them that the hillsides were totally covered."[2]

In her later years, Malvina Reynolds contributed songs and material to PBS's Sesame Street, on which she made occasional appearances as a character called "Kate."

This article uses material from the article Malvina Reynolds from the free encyclopedia Wikipedia and it is licensed under the GNU Free Documentation License.