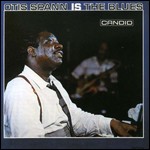 Spann's father was, according to some sources, a pianist called Friday Ford. His mother, Josephine Erby, was a guitarist who had worked with Memphis Minnie and Bessie Smith, and his stepfather, Frank Houston Spann, was a preacher and musician. One of five children, Spann began playing the piano at the age of seven, with some instruction from Friday Ford, Frank Spann, and Little Brother Montgomery.[8]

By the age of 14, he was playing in bands in the Jackson area. He moved to Chicago in 1946, where he was mentored by Big Maceo Merriweather. Spann performed as a solo act and with the guitarist Morris Pejoe, working a regular spot at the Tic Toc Lounge.[3] Spann became known for his distinctive piano style. He replaced Merriweather as Muddy Waters's piano player in late 1952 and participated in his first recording session with the band on September 24, 1953.[9] He continued to record as a solo artist and session player with other musicians, including Bo Diddley and Howlin' Wolf, during his tenure with the group. He stayed with Waters until 1968.[10]

Spann's work for Chess Records includes the 1954 single "It Must Have Been the Devil" backed with "Five Spot", with B.B. King and Jody Williams on guitars. During his time at Chess he played on a few of Chuck Berry's early records, including the studio version of "You Can't Catch Me". In 1956, he recorded two unreleased tracks with Big Walter Horton and Robert Lockwood.[11] He recorded a session with the guitarist Robert Lockwood, Jr. and vocalist St. Louis Jimmy in New York on August 23, 1960, which was issued on the albums Otis Spann Is the Blues and Walking the Blues. A 1963 session for Storyville Records was recorded in Copenhagen. He worked with Waters and Eric Clapton on recordings for Decca[12] and with James Cotton for Prestige in 1964.

The Blues Is Where It's At, Spann's 1966 album for ABC-Bluesway, includes contributions from George "Harmonica" Smith, Waters, and Sammy Lawhorn. The Bottom of the Blues (1967), featuring Spann's wife, Lucille Spann (June 23, 1938 – August 2, 1994),[13] was released by Bluesway. He worked on albums with Buddy Guy, Big Mama Thornton, Peter Green, and Fleetwood Mac in the late 1960s. In 2012, Silk City Records released Someday which featured live and studio performances from 1967 produced by the noted blues guitarist Son Lewis.

Spann died of liver cancer in Chicago in 1970. He was buried in Burr Oak Cemetery, in Alsip, Illinois. His grave was unmarked for almost thirty years, until Steve Salter (president of the Killer Blues Headstone Project) wrote a letter to Blues Revue magazine, saying, "This piano great is lying in an unmarked grave. Let's do something about this deplorable situation". Blues enthusiasts from around the world sent donations to purchase a headstone. On June 6, 1999, the marker was unveiled in a private ceremony. The stone is inscribed, "Otis played the deepest blues we ever heard – He'll play forever in our hearts".

In 1972, the site of the Ann Arbor Blues and Jazz Festival was named "Otis Spann Memorial Field".[14]

He was posthumously elected to the Blues Hall of Fame in 1980.

This article uses material from the article Otis Spann from the free encyclopedia Wikipedia and it is licensed under the GNU Free Documentation License.

Willow Weep For Me Lisette Spinnler
Update Required To play the media you will need to either update your browser to a recent version or update your Flash plugin.