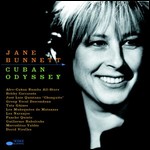 Mary Jane "Jane" Bunnett,[1] OC (born October 22, 1956) is a Canadian musician and educator. A soprano saxophonist, flautist and bandleader, she is especially known for performing Afro-Cuban jazz. She travels regularly to Cuba to perform with Cuban musicians.[3]

Bunnett was born in Toronto, Ontario.[1] She received piano instruction at The Royal Conservatory of Music, but "after three years, and achievement of Grade 10 piano credentials, she developed tendonitis",[1] and so she changed her instruments, from pursuing her career "as a classical pianist...at age 20 to jazz and to flute and soprano saxophone."[4]

In addition to her primary instruments, Bunnett also plays the trompeta china, a Cuban wind instrument of Chinese origin.

In 2004, Bunnett was appointed an Officer of the Order of Canada, the highest civilian honour given in this country, granted to Canadian citizens 'for outstanding achievement and service to the country or to humanity at large.'[2] In 2006, she was awarded an honorary doctorate by Queen's University at Kingston, Ontario, Canada.

Bunnett is married to another musician, trumpeter Larry Cramer.[3] They reside in Toronto but have traveled to Cuba for musical collaborations for more than 30 years.[3] Many of Bunnett's recordings include Cramer compositions.

Bunnett is also a social activist.[2]

This article uses material from the article Jane Bunnett from the free encyclopedia Wikipedia and it is licensed under the GNU Free Documentation License.

Il bambino e L'aquilone Aka Trio
Update Required To play the media you will need to either update your browser to a recent version or update your Flash plugin.