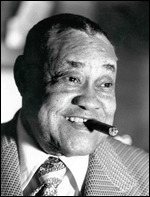 Sykes was born in Elmar, Arkansas, and grew up near Helena. At age 15, went on the road playing piano in a barrelhouse style of blues. Like many bluesmen of his time, he travelled around playing to all-male audiences in sawmill, turpentine and levee camps along the Mississippi River, gathering a repertoire of raw, sexually explicit material. His wanderings eventually brought him to St. Louis, Missouri, where he met St. Louis Jimmy Oden,[2] the writer of the blues standard "Goin' Down Slow".

In 1929 he was spotted by a talent scout and sent to New York City to record for Okeh Records.[3] His first release was "44 Blues" which became a blues standard and his signature song.[3] He soon began recording for different labels under various names, including Easy Papa Johnson, Dobby Bragg, and Willie Kelly (for Victor Records from 1930 to 1933). During this period he befriended another blues musician, the singer Charlie "Specks" McFadden, and accompanied him on half of the McFadden's recordings.[4] After he and Oden moved to Chicago, Sykes found his first period of fame when he signed a contract with Decca Records in 1934.[3] In 1943, he signed with Bluebird Records and recorded with the Honeydrippers.[5] Sykes and Oden continued their musical friendship into the 1960s.

In Chicago, Sykes began to display an increasing urbanity in his songwriting, using an eight-bar blues pop gospel structure instead of the traditional twelve-bar blues. Despite the growing urbanity of his style, he gradually became less competitive in the post–World War II music scene. After his contract with RCA Victor expired, he recorded for smaller labels, such as United, until his opportunities ran out in the mid-1950s.[3]

Sykes left Chicago in 1954 for New Orleans as electric blues was taking over the Chicago blues clubs. When he returned to recording in the 1960s, it was for labels such as Delmark, Bluesville, Storyville and Folkways, which were documenting the quickly passing blues history.[6] He lived out his final years in New Orleans, where he died from a heart attack[7] on July 17, 1983.[1]

Sykes had a long career, spanning the pre-war and postwar eras. His pounding piano boogies and risqué lyrics characterize his contributions to the blues. He was responsible for influential blues songs such as "44 Blues", "Driving Wheel", and "Night Time Is the Right Time".[1]

This article uses material from the article Roosevelt Sykes from the free encyclopedia Wikipedia and it is licensed under the GNU Free Documentation License.