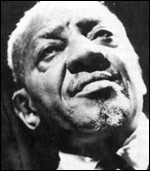 Alex or Aleck Miller (né Ford, possibly December 5, 1912[3] – May 24, 1965),[4] known later in his career as Sonny Boy Williamson, was an American blues harmonica player, singer and songwriter.[5] He was an early and influential blues harp stylist who recorded successfully in the 1950s and 1960s. Miller used various names, including Rice Miller and Little Boy Blue, before calling himself Sonny Boy Williamson, which was also the name of a popular Chicago blues singer and harmonica player. To distinguish the two, Miller has been referred to as Sonny Boy Williamson II.

He first recorded with Elmore James on "Dust My Broom". Some of his popular songs include "Don't Start Me Talkin'", "Help Me", "Checkin' Up on My Baby", and "Bring It On Home". He toured Europe with the American Folk Blues Festival and recorded with English rock musicians, including the Yardbirds, the Animals, and Jimmy Page. "Help Me" became a blues standard,[6] and many blues and rock artists have recorded his songs.

Miller was born Alex Ford (pronounced "Aleck") on the Sara Jones Plantation in Tallahatchie County, Mississippi. The date and year of birth are uncertain. He claimed to have been born on December 5, 1899, but David Evans, professor of music and an ethnomusicologist at the University of Memphis,[7] claims to have found census records that he was born around 1912, being seven years old on February 2, 1920, the day of the census.[8][9] His gravestone in or near Tutwiler, Mississippi, set up by record company owner Lillian McMurry twelve years after his death, gives his date of birth as March 11, 1908, but has no basis for being recognized as accurate.[4][10]

He lived and worked with his sharecropper stepfather, Jim Miller, whose last name he soon adopted, and mother, Millie Ford, until the early 1930s. Beginning in the 1930s, he traveled around Mississippi and Arkansas and encountered Big Joe Williams, Elmore James and Robert Lockwood, Jr., also known as Robert Junior Lockwood, who would play guitar on his later Checker Records sides. He was also associated with Robert Johnson during this period. Miller developed his style and raffish stage persona during these years. Willie Dixon recalled seeing Lockwood and Miller playing for tips in Greenville, Mississippi, in the 1930s. He entertained audiences with novelties such as inserting one end of the harmonica into his mouth and playing with no hands. At this time he was often known as "Rice" Miller—a childhood nickname stemming from his love of rice and milk[11]—or as Little Boy Blue.[12]

In 1941 Miller was hired to play the King Biscuit Time show, advertising the King Biscuit brand of baking flour on radio station KFFA in Helena, Arkansas, with Lockwood. The program's sponsor, Max Moore, began billing Miller as Sonny Boy Williamson, apparently in an attempt to capitalize on the fame of the well-known Chicago-based harmonica player and singer Sonny Boy Williamson (birth name John Lee Curtis Williamson, died 1948). Although John Lee Williamson was a major blues star who had already released dozens of successful and widely influential records under the name "Sonny Boy Williamson" from 1937 onward, Miller would later claim to have been the first to use the name. Some blues scholars believe that Miller's assertion he was born in 1899 was a ruse to convince audiences he was old enough to have used the name before John Lee Williamson, who was born in 1914.

In 1949, Williamson relocated to West Memphis, Arkansas, and lived with his sister and her husband, Howlin' Wolf. (Later, for Checker Records, he did a parody of Howlin' Wolf, entitled "Like Wolf".) He started his own KWEM radio show from 1948 to 1950, selling the elixir Hadacol. He brought his King Biscuit musician friends to West Memphis—Elmore James, Houston Stackhouse, Arthur "Big Boy" Crudup, Robert Nighthawk and others—to perform on KWEM radio. Williamson married Howlin' Wolf's half-sister Mae and he showed Wolf how to play harmonica.[13]

Williamson's first recording session took place in 1951 for Lillian McMurry of Trumpet Records, based in Jackson, Mississippi, three years after the death of John Lee Williamson, which for the first time allowed some legitimacy to Miller's carefully worded claim to being "the one and only Sonny Boy Williamson". McMurry later erected Williamson's headstone, near Tutwiler, Mississippi, in 1977.

When Trumpet went bankrupt in 1955, Williamson's recording contract was yielded to its creditors, who sold it to Chess Records in Chicago. He had begun developing a following in Chicago beginning in 1953, when he appeared there as a member of Elmore James's band. During his Chess years he enjoyed his greatest success and acclaim, recording about 70 songs for the Chess subsidiary Checker Records from 1955 to 1964. His first LP record, Down and Out Blues, was released by Checker in 1959.

In the early 1960s he toured Europe several times during the height of the British blues craze, backed on a number of occasions by the Authentics (see American Folk Blues Festival), recording with the Yardbirds (for the album Sonny Boy Williamson and The Yardbirds) and The Animals, and appearing on several TV broadcasts throughout Europe. Around this time he was quoted as saying of the backing bands who accompanied him, "those British boys want to play the blues real bad, and they do". According to the Led Zeppelin biography Hammer of the Gods, while in England Sonny Boy set his hotel room on fire while trying to cook a rabbit in a coffee percolator. The book also maintains that future Led Zeppelin vocalist Robert Plant stole one of the bluesman's harmonicas at one of these shows. Robert Palmer, writing in "Deep Blues", stated that during this tour Williamson allegedly stabbed a man during a street fight and left the country abruptly.

Sonny Boy took a liking to the European fans, and while there had a custom-made, two-tone suit tailored personally for him, along with a bowler hat, matching umbrella, and an attaché case for his harmonicas. He appears credited as "Big Skol" on Roland Kirk's live album Kirk in Copenhagen (1963).[15] One of his final recordings from England, in 1964, featured him singing "I'm Trying to Make London My Home", with Hubert Sumlin providing the guitar.

Upon his return to the U.S., he resumed playing the King Biscuit Time show on KFFA, and performed in the Helena, Arkansas area. As fellow musicians Houston Stackhouse and Peck Curtis waited at the KFFA studios for Williamson on May 25, 1965, the 12:15 broadcast time was closing in and Sonny Boy was nowhere in sight. Peck left the radio station to locate Williamson, and discovered his body in bed at the rooming house where he had been staying, dead of an apparent heart attack suffered in his sleep the night before. Williamson is buried on New Africa Road, just outside Tutwiler, Mississippi at the site of the former Whitman Chapel cemetery. His headstone was provided by Mrs. Lillian McMurry, owner of Trumpet Records; the death date shown on the stone is incorrect.[4]

As Sonny Boy Williamson His Harmonica and Houserockers

Some of his better-known songs are "Don't Start Me to Talkin'" (his only major hit, reaching number 3 on the Billboard R&B chart in 1955), "Fattenin' Frogs for Snakes", "Keep It to Yourself", "Your Funeral and My Trial", "Bye Bye Bird", "Nine Below Zero", "Help Me", "Checkin' Up on My Baby", and "Little Village". Multiple unreleased takes of "Little Village" were issued on a 1969 Chess LP reissue titled Bummer Road and became notorious for including a joking but profane exchange between Williamson and Leonard Chess. A notice on the back cover warned disc jockeys the song was "not suitable for airplay".

His song "Eyesight to the Blind" was performed by the Who as a key song in the rock opera Tommy (the only song in that work not written by a member of the Who). It was later covered by Aerosmith for the album Honkin' on Bobo.

His "One Way Out", reworked from an Elmore James song and recorded twice in the early 1960s, was popularized by the Allman Brothers Band in the early 1970s.

In interviews in The Last Waltz, members of the Band recounted jamming with Williamson and making plans to perform as his backing band (he died before their plans could be realized), prior to their initial fame performing with Bob Dylan.

Many of his most famous recordings are on the compilation albums The Essential Sonny Boy Williamson and His Best.

Williamson's recordings, both issued and unissued, for Lillian McMurray's Trumpet label have been reissued by Arhoolie, Alligator, Purple Pyramid, Collectables, and a handful of other domestic and import imprints. His recordings made during his at years Chess and Checker are on various compilations released by MCA/Chess. His European recordings have been issued by Alligator, Analogue Productions, Storyville, and others.

Williamson influenced modern blues and blues rock artists, as is shown by the number of his songs that were covered, including

This article uses material from the article Sonny Boy Williamson II from the free encyclopedia Wikipedia and it is licensed under the GNU Free Documentation License.

I Don't Know Why Unit 3 Deep
Update Required To play the media you will need to either update your browser to a recent version or update your Flash plugin.