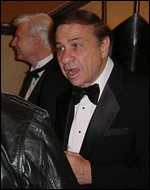 Richard Morton Sherman (born June 12, 1928) is an American songwriter who specialized in musical films with his brother Robert Bernard Sherman. According to the official Walt Disney Company website and independent fact checkers, "the Sherman Brothers were responsible for more motion picture musical song scores than any other songwriting team in film history."[1] Some of the Sherman Brothers' best known songs were incorporated into live action and animation musical films including: Mary Poppins, The Jungle Book, The Many Adventures of Winnie the Pooh, Chitty Chitty Bang Bang, Snoopy Come Home, Bedknobs and Broomsticks, The Slipper and the Rose, and Charlotte's Web. Their most well known work, however, remains the theme park song "It's a Small World (After All)". According to Time.com, this song is the most performed song of all time.[2][3]

Richard Morton Sherman was born in New York City to Russian Jewish immigrants, Rosa (Dancis) and Al Sherman.[4] Together with his older brother Robert, "The Sherman Brothers" eventually followed in their songwriting father's footsteps to form a long-lasting songwriting partnership.

Following seven years of frequent cross-country moves, the Sherman family finally settled down in Beverly Hills, California in 1937. During Richard's years at Beverly Hills High School, he became fascinated with music and studied several instruments, including the flute, piccolo, and piano.

At his 1946 graduation from Beverly Hills High School, Sherman and classmate André Previn played a musical duet with Previn on piano and Sherman on flute. Coincidentally, in 1965 both composers won Oscars in music categories for different films.

In 1953 Sherman was drafted into United States Army, being assigned to the Army Band and glee club. Serving as musical conductor for both groups from 1953 until his honorable discharge in 1955, he was stationed solely in the United States during his time in the service. During this time, his brother Robert worked with other songwriters.

As a student at Bard College, Sherman majored in music, writing numerous sonatas and "art songs". His ambition to write the "great american symphony" eventually led him to write songs. Within two years of graduating, Sherman and his brother began writing songs together, answering a challenge from their father.

Within two years, Sherman and his brother Robert began writing songs together on a challenge from their father, Al Sherman, a successful popular songwriter in the "Tin Pan Alley" days ("No! No! A Thousand Times No!!", "You Gotta Be a Football Hero").[5]

In 1958, Sherman founded the music publishing company, Music World Corporation, which later worked with Disney's BMI publishing arm, Wonderland Music Company.[6] That same year, the Sherman Brothers had their first Top Ten hit with "Tall Paul", which was sung by Annette Funicello. The success of this song attracted the attention of Walt Disney who eventually hired the Sherman Brothers as Staff Songwriters for Walt Disney Studios.[7] While at Disney, the Sherman Brothers wrote what is perhaps their most recognized song: "It's a Small World (After All)" for the 1964 New York World's Fair.

Robert and Richard Sherman worked directly for Walt Disney until Disney's death in 1966. After leaving the company, the brothers worked freelance as songwriters on scores of motion pictures, television shows, theme park exhibits and stage musicals.

Their first non-Disney assignment came with Albert R. Broccoli's motion picture production Chitty Chitty Bang Bang in 1968 which garnered the brothers their third Academy Award Nomination. In 1973, the Sherman Brothers made history by becoming the only Americans ever to win First Prize at the Moscow Film Festival for Tom Sawyer for which they also authored the screenplay.[9]

The Slipper and the Rose was picked to be the Royal Command Performance of the year and was attended by Queen Elizabeth. A modern musical adaptation of the classic Cinderella story, Slipper also features both song-score and screenplay by the Sherman Brothers. That same year the Sherman Brothers received their star on the Hollywood "Walk of Fame" directly across from Grauman's Chinese Theater.[10]

Outside the motion picture realm, their Tony-nominated Over Here! (1974)[11] was the biggest-grossing original Broadway Musical of that year. The Sherman Brothers have also written numerous top-selling songs, including "You're Sixteen", which holds the distinction of reaching Billboard's Top Ten twice; first with Johnny Burnette in 1960 and then with Ringo Starr fourteen years later.[12] Other top-ten hits include, "Pineapple Princess", "Let's Get Together" and more.

In 2000, the Sherman Brothers wrote the song score for Disney's blockbuster film: The Tigger Movie (2000). This film marked the brothers' first major motion picture for the Disney company in over 28 years.[13]

In 2002 the stage musical Chitty Chitty Bang Bang premiered in London. It was the most successful stage show ever produced at the London Palladium, boasting the longest run in that century-old theatre's history. In early 2005 a second Chitty company premiered on Broadway (New York City) at the Foxwoods Theatre (then the Hilton Theatre). The Sherman Brothers wrote an additional six songs specifically for the new stage productions.[14]

A new Disney and Cameron Mackintosh production of Mary Poppins: The Stage Musical made its world premiere at the Prince Edward Theatre in December 2004 and features the Sherman Brothers classic songs.[16]

In 2008 Mary Poppins embarked on a UK tour as well as a world tour beginning in Göteborg, Sweden. Chitty embarked on a tour of 29 cities in the U.S. which ended in 2009.

Following Robert Sherman's relocation from Beverly Hills to London, England, the brothers continued to collaborate musically. They credited the ability to do so long-distance to technology via fax, e-mail, and the low-cost international telephone service. Both brothers frequently traveled between Los Angeles, New York, and London working together on various musical plays[18] until Robert's death in 2012.

This article uses material from the article Richard M. Sherman from the free encyclopedia Wikipedia and it is licensed under the GNU Free Documentation License.

Cakewalking Babies Back Home Jazztone Dry Weepers
Update Required To play the media you will need to either update your browser to a recent version or update your Flash plugin.