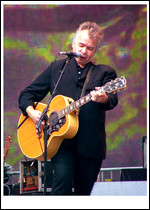 John Prine (born October 10, 1946, in Maywood, Illinois) is an American country/folk singer-songwriter. He has been active as a recording artist and live performer since the early 1970s.

Prine is the son of William Prine and Verna Hamm. Prine himself started playing guitar at age 14, taught by his brother, David.[1] He was a postman for five years and served in the Army before beginning his musical career in Chicago.

In the late 1960s, while Prine was still delivering mail in Maywood, Illinois, he began to sing at open-mic evenings at the Fifth Peg on Armitage Avenue. Prine was initially a spectator, reluctant to perform, but eventually did so in response to a "You think you can do better?" comment made to him by another performer. Chicago Sun-Times movie critic Roger Ebert heard him there and wrote the first review Prine ever received, calling him a great songwriter.[2] He became a central figure in the Chicago Folk Revival, which also included such singer-songwriters as Steve Goodman, Bonnie Koloc, Jim Post and Fred Holstein. Joined by such established musicians as Jethro Burns and Bob Gibson, Prine performed frequently at such clubs as the Earl of Old Town, the Quiet Knight, Somebody Else's Troubles and the Bulls.

In 1971 Prine's eponymous debut album was released. He and friend Steve Goodman had each been active in the Chicago folk scene before being "discovered" by Kris Kristofferson (Kristofferson remarked that Prine wrote songs so good that "we'll have to break his thumbs"). The album included his signature songs "Illegal Smile," "Sam Stone," and the folk and country standards "Angel from Montgomery" and "Paradise." The album also included "Hello In There", a song about aging that was later covered by numerous artists and "Far From Me," a lonely waltz about lost love for a waitress that Prine later said was his favorite of all his songs. The album received many positive reviews, and some hailed Prine as "the next Dylan." Bob Dylan himself appeared unannounced at one of Prine's first New York City club appearances, anonymously backing him on harmonica.

Prine's second album, Diamonds In The Rough, was a surprise for many after the critical success of his first LP; it was an uncommercial, stripped-down affair that reflected Prine's fondness for bluegrass music and features songs reminiscent of Hank Williams's work as Luke The Drifter. Highlights include the allegorical "The Great Compromise," which features a recitation and addresses the Vietnam War, and the touching ballad "Souvenirs," which Prine later recorded with Goodman.

Later albums include Sweet Revenge (1973), containing such fan favorites as "Dear Abby," "Grandpa Was A Carpenter," and "Christmas In Prison", and Common Sense (1975), with "Come Back to Us Barbara Lewis Hare Krishna Beauregard". The latter album was Prine's first to be charted in the US Top 100 by Billboard, reflecting growing commercial success. It was produced by Steve Cropper. Many veteran Prine fans view the release of 1978's Bruised Orange as a creative highpoint. The Steve Goodman-produced album gave listeners songs such as "The Hobo Song," "Sabu Visits the Twin Cities Alone," and the title track showing that he could capture the human condition as easily as writing politically inspired anthems.

In 1974, singer David Allan Coe achieved considerable success on the country charts with "You Never Even Called Me By My Name", written by Prine and Goodman. The song good-naturedly spoofed stereotypical country music lyrics. Prine refused to take a songwriter's credit and the tune went to Goodman, although Goodman bought Prine a jukebox as a gift from his publishing royalties.

The 1979 album Pink Cadillac features two songs produced by legendary Sun Records founder Sam Phillips, who by this time rarely did any studio work. The first number, "Saigon," is about a Vietnam vet traumatized by the war ("The static in my attic's gettin' ready to blow"). During the recording, one of the guitar amps blew up (which is evident on the album track). The other song Phillips produced is the folky "How Lucky," which is about Prine's hometown. "Chinatown," the first song on the record, contains what is Prine's most controversial lyrics, including a reference to "a slant-eyed chicky" and the line "I got a sugar rush that'd make a nigger blush." The song initially appears completely at odds with the liberal-minded songwriter's previous work and baffled many fans and critics. It should be noted, however, that other songwriters of the era (including Randy Newman and John Lennon) also wrote songs that used strong, potentially offensive language, and it is likely that Prine was assuming a character in a song whose lyrics did not reflect his own beliefs.

Prine continued writing and recording albums throughout the 1980s and formed his own record label, Oh Boy Records. His songs continued to be covered by other artists; the country supergroup The Highwaymen recorded "The Twentieth Century Is Almost Over," which had been written by Prine and Goodman. Steve Goodman died of leukemia in 1984 and Prine continues to perform many of Goodman's songs in concert to this day, such as "My Old Man."

In 1991, Prine released the Grammy Award-winning The Missing Years, his first collaboration with producer and Heartbreakers bassist Howie Epstein. The title song records Prine's humorous take on what Jesus did in the unrecorded years between his childhood and his ministry. In 1995, Lost Dogs and Mixed Blessings was released, another collaboration with Epstein. Prine followed in 1999 with In Spite of Ourselves, which was unusual for him in that it contained only one original songthe rest were covers of classic country songsand all were duets with well-known female country vocalists, including Lucinda Williams, Emmylou Harris, Dolores Keane, and Iris DeMent (whom Prine referred to as his "favorite girl singers".)

In early 1998, Prine was diagnosed with squamous cell cancer on the right side of his neck. He had surgery to remove the diseased tissue and was left with a substantial loss of tissue. This was followed by six weeks of radiation therapy. [3] Some of Prine's listeners believe that the surgery has added "gravel" to his voice.[4] In 2003, he was given a Lifetime Achievement Award for songwriting by the UK's BBC Radio 2 and that same year was inducted into the Nashville Songwriters Hall of Fame. The following year saw his song "Sam Stone" covered by Laura Cantrell for the Future Soundtrack for America compilation.

In 2005, Prine released his first all-new offering since In Spite of Ourselves, the album Fair & Square, which tended toward a more laid-back, acoustic approach than, for example, Lost Dogs and Mixed Blessings. The album contains songs such as "Safety Joe", about a man who has never taken any risks in his life, and also "Some Humans Ain't Human", Prine's protest piece on the album, which talks about the ugly side of human nature and includes a quick shot at President George W. Bush. Fair & Square won the 2006 Grammy Award for Best Contemporary Folk Album. The album contains original songs plus two covers: A.P. Carter's "Bear Creek Blues" and Blaze Foley's "Clay Pigeons."

Prine has taken his place as one of the most influential songwriters of his generation. In 2009, Bob Dylan told the Huffington Post that Prine was one of his favourite writers, stating "Prine's stuff is pure Proustian existentialism. Midwestern mindtrips to the nth degree. And he writes beautiful songs. I remember when Kris Kristofferson first brought him on the scene. All that stuff about "Sam Stone," the soldier junkie daddy, and "Donald and Lydia," where people make love from ten miles away. Nobody but Prine could write like that."[5] In Johnny Cash's autobiography Cash, he admitted "I don't listen to music much at the farm, unless I'm going into songwriting mode and looking for inspiration. Then I'll put on something by the writers I've admired and used for years (Rodney Crowell, John Prine, Guy Clark, and the late Steve Goodman are my Big Four)..."[6] When asked by Word Magazine in 2008 if he heard Pink Floyd's influence in newer British bands like Radiohead, Roger Waters replied "I don't really listen to Radiohead. I listened to the albums and they just didn't move me in the way, say, John Prine does. His is just extra-ordinarily eloquent musicand he lives on that plain with Neil Young and Lennon."[7] Prine received the Artist of the Year award at the Americana Music Awards on September 9, 2005. The award was accepted in his name by awards host and long-time friend Billy Bob Thornton.

John Prine continues to tour and resides in Gulfport, an eclectic neighborhood of St. Petersburg, FL. He occasionally plays, unscheduled and unannounced, at a local bar in St. Pete Beach, much to the delight of the locals.

This article uses material from the article John Prine from the free encyclopedia Wikipedia and it is licensed under the GNU Free Documentation License.