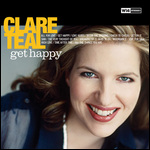 Clare Teal (born 14 May 1973, Kildwick, Yorkshire) is an English jazz singer who has become famous not only for her singing, but also for having signed the biggest ever recording contract by a British jazz singer.[2] [3]

Teal was brought up in the Kildwick area of Yorkshire. She developed an interest in jazz from an early age, through her father's collection of 78rpm records, becoming "obsessed" with big band singers like Ella Fitzgerald and big bands like Joe Loss.[3] She took music lessons (first on the electronic organ, then more formally on clarinet), before going to study music at Wolverhampton University.[4]

While at university, Teal found herself without clarinet for an unexpected examination. Deciding to sing instead, she not only got her "best grades ever", but discovered that she loved singing in public.[4] After graduation, she started a career in advertising, singing in her spare time with various amateur and semi-professional bands.

In a 2007 article which appeared in The Times, Teal stated that she had recently lost about three stone (19 kilograms) in weight after discovering that she is affected by Polycystic ovary syndrome.[3] She considers herself lucky because her record company Sony never asked her to lose weight. She says

I think its quite exciting that in this day and age, and in an industry where there is so much pressure to be thin... Theyre just interested in my voice and my music.[3]

Since losing the weight she has started wearing clothes on stage designed by Antony Price.

Teal came out as a lesbian while she was at university.[3][5] She lives in Bath with her girlfriend. In 2007 she said that although she had lived in Bath for more than a decade, she still feels like a Northerner, saying she is "never not from Yorkshire".[3]

Teal's break came when she was asked to stand in for Stacey Kent at a weekend festival in Llandrindod Wells. This led (after some determined self-promotion, in which she drew upon her advertising skills) to a three-album contract with the jazz-specialist label Candid Records. Her popularity soared, with appearances on radio and television bringing her to the attention of a wider public. This eventually led to her being signed by Sony in what was the biggest recording deal by any British jazz singer.[2][3]

In live performances, Teal performs with a band led by pianist/music director Grant Windsor. While the majority of her recordings are standards, all her albums feature original songs or contemporary covers including post-swing material, most notably a cover of The Mamas & the Papas' "California Dreaming". This track attracted the attention of BBC Radio presenter Michael Parkinson, garnering significant publicity during her period with Candid Records.

Since 2005 Teal has been the presenter of the BBC Radio 2 show, Big Band Special, on a Monday night and regularly appears as a presenter on Friday Night is Music Night.[7] Since 2 August 2009, she has also been presenting Sunday Night at 10, after former host Malcolm Laycock's decision to leave Radio 2.[8]

This article uses material from the article Clare Teal from the free encyclopedia Wikipedia and it is licensed under the GNU Free Documentation License.

Too Heavy Blues Buddy Tate, Milt Buckner & Wallace Bishop
Update Required To play the media you will need to either update your browser to a recent version or update your Flash plugin.