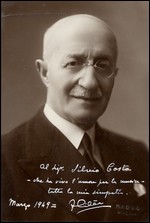 Born in Palmi near Reggio di Calabria, Cilea gave early indication of an aptitude for music when at the age of four he heard a performance of Vincenzo Bellini's Norma and was greatly affected by it. He was sent to study music at the Conservatorio San Pietro a Maiella in Naples, where he quickly demonstrated his diligence and precocious talent, earning a gold medal from the Ministero della Pubblica Istruzione (Department of Education).

In 1889, for his final examination at the end of his course of study, he submitted his opera Gina, with a libretto by Enrico Golisciani which was adapted from the old French play Catherine, ou La Croix d'or by Baron Anne-Honoré-Joseph Duveyrier de Mélésville (1787-1865). This melodramma idilico was performed in the college theatre, and it attracted the attention of the publishers Sonzogno, who arranged for a second production, in Florence, in 1892.

Sonzogno also then commissioned from Cilea La Tilda, a verismo opera in three short acts along the lines of Cavalleria rusticana. With a libretto by Angelo Zanardini, La Tilda had a successful first performance in April 1892 at the Teatro Pagliano in Florence, and after performances in a number of Italian theatres, it arrived at the Vienna Exhibition on 24 September 1892, alongside other works from the firm of Sonzogno. The composer never showed much sympathy for this work, the subject of which he reluctantly agreed to set to music in order to please Sonzogno and to avoid throwing away a rare professional opportunity. The loss of the orchestral score has prevented the modern revival of this work, whose fresh and catchy melodies can nevertheless be discovered in the transcription for voice and piano.

In 1897 (27 November), the Teatro Lirico in Milan saw the première of Cilea's third opera L'Arlesiana, based on the play by Alphonse Daudet, with a libretto by Leopoldo Marenco. Among the cast was the young Enrico Caruso, who performed with great success the Lamento di Federico: È la solita storia del pastore, the romance which was to keep alive the memory of the opera even to the present day. In reality L'Arlesiana was a failure which Cilea, being convinced of the work's value, tried repeatedly to remedy, making drastic and detailed alterations throughout the remainder of his life. In the score which we hear today, it is hard to find a single bar which is completely unchanged from the original. The revised opera was however still not successful, apart from a brief period in the 1930s when it benefited from political support which the composer established through personal contact with Mussolini.

Again at the Teatro Lirico in Milan, in 1902 (6 November)and again with Enrico Caruso, the composer won an enthusiastic reception for Adriana Lecouvreur, a 4-act opera with a libretto by Arturo Colautti, set in 18th century Paris and based upon a play by Eugène Scribe. Adriana Lecouvreur is the opera of Cilea which is best known to international audiences today, and it reveals the spontaneity of a melodic style drawn from the Neapolitan school combined with harmonic and tonal shading influenced by French composers such as Massenet.

As a performer there is a number of examples of Cilea's art. At the piano Cilea accompanied (none too elegantly) Caruso in a recording of a part of the duet Non piu nobile and made another recording with the baritone De Luca at the same time (November 1902). In 1904 for the Gramophone (and Typewriter Company) he accompanied the tenor Fernando De Lucia in L'anima ho stanca from Adriana Lecouvreur and in the song Luntananza, an effort which critic Michael Henstock (in his biography of De Lucia) declares is hardly inspired by De Lucia's fine performances. Even given the crude recording techniques of the day Cilea's piano playing (put charitably) seems square and lifeless. (see Henstock).

Cilea's last opera, premièred at La Scala in Milan on 15 April 1907 under the baton of Arturo Toscanini, was the 3-act tragedy Gloria, again with a libretto by Colautti, based on a play by Victorien Sardou. The opera was withdrawn after only two performances; and the failure of this work, even though the composer attempted a later revision, was enough to drive him to abandon the operatic stage for good. There are however indications of some later unfulfilled operatic projects, which survive as parts or sketches of libretti, such as Il ritorno dell'amore by Renato Simoni, Malena by Ettore Moschino, and La rosa di Pompei, also by Moschino (dated "Naples, 20 May 1924"). Some sources also refer to an opera of 1909, completed but never performed, called Il matrimonio selvaggio, but no copy of this survives and Cilea himself made no mention of it in his volumes of memoirs ("Ricordi").

Nevertheless he continued to compose chamber music, and some orchestral music. In 1913 he produced a symphonic poem in honour of Giuseppe Verdi with verses by Sem Benelli, which was first performed at the Teatro Carlo Felice in Genoa. After this he devoted himself principally to education and became director of the Conservatorio Vincenzo Bellini in Palermo, and then at his alma mater, the Conservatorio San Pietro a Maiella in Naples, where he ended his teaching career in 1936.

In his last years Cilea's eyesight failed but his mind was active enough to encourage and work with singers of the day. Among his last musical activities was his championship of the soprano Magda Olivero (1910-), whose performances in the title role of Adriana Lecouvreur he especially admired. Cilea died on 20 November 1950 in Varazze, a town near Savona in Liguria which offered him honorary citizenship and where he spent the last years of his life. The Conservatorio di Musica and the Teatro Communale of Reggio di Calabria were renamed in his memory, and his native town of Palmi built a mausoleum in his memory, decorated with scenes from the myth of Orpheus.

This article uses material from the article Francesco Cilea from the free encyclopedia Wikipedia and it is licensed under the GNU Free Documentation License.