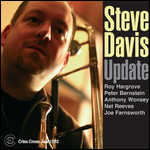 Steve Davis was raised in Binghamton, New York, where he grew up with jazz music being played in the household[1] (father's record collection, grandparents played). The Binghamton scene included many talented musicians including mentors Doug Beardsley (Music Box jam sessions) and Al Hamme (SUNY Binghamton) as well as peers Kris Jensen, Tony Kadleck, Tom Dempsey, Dena DeRose, John Hollenbeck and many others. He is married to the pianist Mary Di Paola-Davis.

He studied jazz under Dr. Jackie McLean at The Hartt School of the University of Hartford in Connecticut.[1] While in school, Davis also gained valuable experience sitting-in and gigging on the Hartford jazz scene with Hartt professors Hotep Galeta and Nat Reeves, and with Don DePalma, Larry DiNatale and others at The 880 Club. Legendary saxophonist Jackie McLean, founder of Hartt's African-American music program, recommended Steve to Art Blakey,[1] whose Jazz Messengers he joined at Sweet Basil in New York in December 1989. After Blakey's death, Davis joined the Hartt faculty in 1991 (where he continues to teach today)[2] and taught at The Artist's Collective in Hartford. Steve gained further international recognition playing in his mentor McLean's Sextet from 199297 and in Chick Corea's Origin (1997-2001). Davis has been a member of the acclaimed, New York-based cooperative sextet One for All since its inception in 1996.[3] Along with Davis, the band features Eric Alexander, Jim Rotondi, David Hazeltine, John Webber and Joe Farnsworth. Davis also currently plays with Larry Willis' Quintet, The Dizzy Gillespie Alumni All-Star Big Band/Septet, leads The Steve Davis Quintet (featuring saxophonist Mike DiRubbo)[4] and is a fixture on the New York and Hartford jazz scenes.

This article uses material from the article Steve Davis (trombonist) from the free encyclopedia Wikipedia and it is licensed under the GNU Free Documentation License.