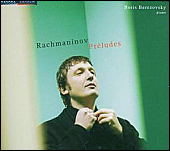 Berezovsky studied at the Moscow Conservatory with Eliso Virsaladze and privately with Alexander Satz. Following his London début at the Wigmore Hall in 1988, The Times described him as "an artist of exceptional promise, a player of dazzling virtuosity and formidable power."[1]

In May 2005 he had his first solo recital in Théâtre des Champs-Élysées in Paris and played in the same venue in January 2006 with the Orchestre National de France. In January 2007 he played seven recitals "Carte Blanche" in the Louvre.

He has initiated and organized the International Medtner Festival that took place 2006 and 2007 in Moscow, Yekaterinburg and Vladimir, as he has championed the composer since the early 1990s and has been one of the foremost recent interpreters of Medtner's music.

Berezovsky's recordings of the complete Beethoven Piano concertos with the Swedish Chamber Orchestra with Thomas Dausgaard have been greeted with high critical acclaim. He has made a considerable number of records for Teldec, including solo discs of works by Chopin, Schumann, Rachmaninoff, Mussorgsky, Balakirev, Medtner, Ravel and the complete Liszt Transcendental Etudes.

With the Mirare Label, he has recorded the Rachmaninoff Préludes (May 2005) as well as that composer's complete Piano Concertos with the Ural Philharmonic Orchestra conducted by Dmitri Liss (August 2005). The latter were criticized as being "interpretively lightweight" with a piano tone that "turns ugly above mezzo-forte, which accounts for about 75 percent of the time".[2] His album Tchaikovsky Piano Concerto No. 1 and Khachaturian Piano oncerto (Ural Philharmonic Orchestra/Dmitry Liss) was released on April 2006 in the UK.

The most recent recordings are Medtner Tales & Poems with Yana Ivanilova (soprano), Vassily Savenko (baritone) (Mirare 2008), Medtner Two pieces for two pianos, Op. 58, with Hamish Milne (piano) in: Medtner Complete Piano Sonatas; Piano Works Vol. 7 (Brilliant Classics 2008), Rachmaninoff Suite No. 1 for two pianos, Op. 5 & Suite No. 2 for two pianos, Op. 17, with Brigitte Engerer (piano) (Mirare 2008). In 2010 Berezovsky released a record of his Liszt recital (Mirare 2008). His recording of selected works by Brahms (Piano Concerto No. 2, Variations on a Theme of Paganini, and Hungarian Dances Nos. 1, 2 & 4) was released in January 2011 (Mirare). More recently, Berezovsky released a recording of the Piano Concerto no. 2 by Tchaikovsky and other selected works (also with Mirare).

Berezovsky won the Gold Medal at the 1990 International Tchaikovsky Competition in Moscow.

Berezovsky, who has been married twice, has 3 children with a 4th one on his way.

This article uses material from the article Boris Berezovsky (pianist) from the free encyclopedia Wikipedia and it is licensed under the GNU Free Documentation License.

Prelude To A Kiss Thomas Dobler & Kenny Drew Jr.
Update Required To play the media you will need to either update your browser to a recent version or update your Flash plugin.