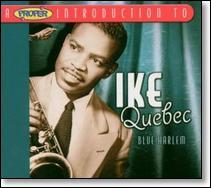 Ike Abrams Quebec (August 17, 1918 – January 16, 1963) was an American jazz tenor saxophonist. He began his career in the big band era of the 1940s, then fell from prominence for a time until launching a comeback in the years before his death.

Critic Alex Henderson wrote, "Though he was never an innovator, Quebec had a big, breathy sound that was distinctive and easily recognizable, and he was quite consistent when it came to down-home blues, sexy ballads, and up-tempo aggression."[1]

Quebec was born in Newark, New Jersey. An accomplished dancer and pianist, he switched to tenor sax as his primary instrument in his early twenties, and quickly earned a reputation as a promising player. His recording career started in 1940, with the Barons of Rhythm.

Later on, he recorded or performed with Frankie Newton, Hot Lips Page, Roy Eldridge,[2] Trummy Young, Ella Fitzgerald, Benny Carter and Coleman Hawkins. Between 1944 and 1951, he worked intermittently with Cab Calloway. He began to record for the Blue Note label in this era, and served as a talent scout (helping pianists Thelonious Monk and Bud Powell come to wider attention). Due to his exceptional sight reading skills, Quebec was also an uncredited impromptu arranger for many Blue Note sessions.

Due in part to struggles with drug addiction (but also due to the fading popularity of the big bands), Quebec recorded only sporadically during the 1950s, though he still performed regularly. He kept abreast of new developments in jazz, and his later playing incorporated elements of hard bop, bossa nova, and soul jazz.

In 1959 he began what amounted to a comeback with a series of albums on the Blue Note label. Blue Note executive Alfred Lion was always fond of Quebec's music, but was unsure how audiences would respond to the saxophonist after a decade of low visibility. In the mid-to-late 1950s, Blue Note issued a series of Quebec singles for the juke box market; audiences responded well, leading to a number of warmly-received albums. Quebec occasionally recorded on piano, as on his 1961 Blue & Sentimental album, where he alternated between tenor and piano, playing the latter behind Grant Green's guitar solos.

Quebec's comeback was short-lived; it was ended by his death from lung cancer. He is buried at Woodland Cemetery, Newark, New Jersey.

Quebec's cousin Danny Quebec West was an alto saxophonist who, at the age of 17, recorded with Thelonious Monk on his first session for Blue Note in 1947.[3]

This article uses material from the article Ike Quebec from the free encyclopedia Wikipedia and it is licensed under the GNU Free Documentation License.