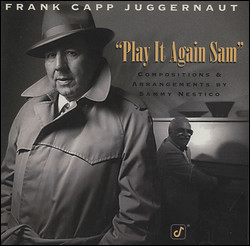 Frank "Frankie" Capp (August 20, 1931 – September 12, 2017) was an American jazz drummer. Capp also played on numerous rock and roll sessions and is considered to be a member of The Wrecking Crew.[1]

Capp was born Francis Cappuccio[2] August 20, 1931, in Worcester, Massachusetts. He began playing with Stan Kenton in 1951 and remained with Kenton for some time. Later he joined Neal Hefti's group. He often accompanied Peggy Lee on her road dates and subsequently went to Los Angeles where he joined Billy May and recorded with The Wrecking Crew. Together with Nat Pierce he founded the Capp/Pierce Juggernaut Big Band in 1975. In In his later years, he resided in Studio City with his partner, Loralee Singman, and performed every Tuesday at Las Hadas Restaurant in Northridge, California accompanied by his fellow jazz colleagues.[3] In 2016, Capp wrote and published his autobiography Drumming Up Business: My Life in Music.[4]

Capp complained that rock drummers had ruined drum hardware. By playing harder than jazz drummers, cymbal stands were built heavier over the years. He said, "I used to be able to move my entire drum kit by myself on the NYC subway."

With Sonny and Cher

As The Frank Capp Juggernaut

This article uses material from the article Frank Capp from the free encyclopedia Wikipedia and it is licensed under the GNU Free Documentation License.

Wave Arseniy Shkaptsov
Update Required To play the media you will need to either update your browser to a recent version or update your Flash plugin.