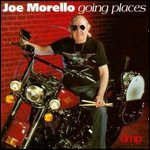 Joseph Albert Morello (July 17, 1928 – March 12, 2011) was an American jazz drummer best known for his work with the Dave Brubeck Quartet. He was particularly noted for playing in the unusual time signatures employed by that group in such pieces as "Take Five" and "Blue Rondo à la Turk". Popular for its work on college campuses during the 1950s, Brubeck's group reached new heights with Morello. In June 1959, Morello participated in a recording session with the quartet—completed by the alto saxophonist Paul Desmond and the bassist Eugene Wright—that yielded "Kathy's Waltz" and "Three to Get Ready", both of which intermingled 3/4 and 4/4 time signatures.[1]

Morello suffered from partial vision from birth,[2] and devoted himself to indoor activities. At six years old, he began studying the violin. Three years later, he was a featured soloist with the Boston Symphony Orchestra, playing Mendelssohn's Violin Concerto, and again three years later.

At the age of 15, Morello met the violinist Jascha Heifetz and decided that he would never be able to equal Heifetz's "sound". Therefore, he switched to drumming, first studying with a show drummer named Joe Sefcik and then George Lawrence Stone, author of the noted drum textbook Stick Control for the Snare Drummer. Stone was so impressed with Morello's ideas that he incorporated them into his next book, Accents & Rebounds, which is dedicated to Morello. Later, Morello studied with Radio City Music Hall percussionist Billy Gladstone.

Morello appeared in many Brubeck performances and contributed to over 60 albums with Brubeck. On "Take Five", he plays an imaginative drum solo maintaining the 5/4 time signature throughout. Another example of soloing in odd time signatures can be heard on "Unsquare Dance", in which he solos using only sticks without drums in 7/4 time. At the end of the track, he can be heard laughing about the "trick" ending. He also features on "Blue Rondo à la Turk", "Strange Meadow Lark", "Pick-Up Sticks" and "Castilian Drums".

During his career, Morello appeared on over 120 albums. He authored several drum books, including Master Studies, published by Modern Drummer Publications, and also made instructional videos. Morello was the recipient of many awards, including Playboy magazine's best drummer award for seven years in a row, and Down Beat magazine's best drummer award five years in a row. He was elected to the Modern Drummer magazine Hall of Fame in 1988, the Percussive Arts Society Hall of Fame in 1993, and was the recipient of Hudson Music's first TIP (Teacher Integration Program) Lifetime Achievement award in June, 2010.[4] [1][5]

Upon his death, Morello's wife gave control of Joe Morello's memorabilia and collections to Marvin Burock, one of Joe's students who had toured extensively with Morello and who was tasked with transcribing Morello's Modern Drummer articles for ten years, .[7][8][9]

This article uses material from the article Joe Morello from the free encyclopedia Wikipedia and it is licensed under the GNU Free Documentation License.

42nd Street Ehud Asherie
Update Required To play the media you will need to either update your browser to a recent version or update your Flash plugin.