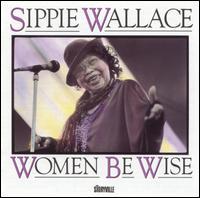 Sippie Wallace (born as Beulah Thomas, November 1, 1898 November 1, 1986) was an American singer-songwriter. Her early career in local tent shows gained her the billing "The Texas Nightingale". Between 1923 and 1927, she recorded over 40 songs for Okeh Records, many written by herself or her brothers, George and Hersal Thomas.[1] Her accompanists included Louis Armstrong, Johnny Dodds, Sidney Bechet, King Oliver, and Clarence Williams. Among the top female blues vocalists of her era, Wallace ranked with Ma Rainey, Ida Cox, Alberta Hunter, and Bessie Smith.

In the 1930s, she left show business to become a church organist, singer, and choir director in Detroit, and performed secular music only sporadically until the 1960s, when she resumed her career. Wallace was nominated for a Grammy Award in 1982, and was inducted into the Michigan Women's Hall of Fame in 1993.[2]

Wallace was born in Plum Bayou, Arkansas, one of 13 children, and later moved with her family as a child to Houston, Texas.[3] In her youth Wallace sang and played the piano in Shiloh Baptist Church, where her father was a deacon, but in the evenings the children took to sneaking out to tent shows. By her mid-teens, they were playing in those tent shows. By performing in the various Texas shows, she built a solid following as a spirited blues singer.

After following her brothers to Chicago in 1923, Wallace worked her way into the city's bustling jazz scene. Her reputation led to a recording contract with Okeh Records in 1923. Wallace's first recorded songs, "Shorty George" and "Up the Country Blues", the former written with her brother George, sold well enough to make Wallace a blues star in the early 1920s.[4] Other successful recordings followed, including "Special Delivery Blues" (with Louis Armstrong), "Bedroom Blues" (written by George and Hersal Thomas), and "I'm a Mighty Tight Woman". Her younger brother Hersal died of food poisoning in 1926 at age 16.

Wallace moved to Detroit in 1929. Her husband Matt and brother George both died in 1936. Wallace for some 40 years was a singer and organ player at the Leland Baptist Church in Detroit. Mercury Records reissued "Bedroom Blues" in 1945. Aside from an occasional performance or recording date, Wallace did little in the blues until she launched a comeback in 1966 after her longtime friend Victoria Spivey coaxed her out of retirement and on the folk and blues festival circuit.

In 1966 Wallace recorded an album on Halloween night, Copenhagen, Denmark, Women Be Wise, with Roosevelt Sykes and Little Brother Montgomery sharing the piano stool.[5] Another 1966 album Sings the Blues, on the latter song, Wallace accompanied herself on piano; otherwise she is backed by either Roosevelt Sykes or Little Brother Montgomery on piano. Includes Wallace's signature song, "Women Be Wise", "Don't Advertise Your Man". The album helped inspire blues-pop singer Bonnie Raitt to take up the blues in the late 1960.[6] In 1971 Raitt recorded a rendition of Sippie Wallace's "Women Be Wise" on her self-titled album Bonnie Raitt. Wallace toured and recorded with Raitt in the 1970s and 1980s, while continuing to perform on her own.[7] The bond between Wallace and Raitt helped bridge the gap between two generations of blues queens.

Wallace recorded on Louis Armstrong album, Louis Armstrong and the Blues Singers (1966), singing "A Jealous Woman Like Me", "Special Delivery Blues", "Jack O'Diamond Blues", "The Mail Train Blues" and "I Feel Good". Wallace also recorded an album of old blues standards with her friend Victoria Spivey, called Sippie Wallace and Victoria Spivey, which came out in 1970 on Spivey's own self-named label. In 1981, Wallace recorded an album Sippie for Atlantic Records, which earned a her a 1983 Grammy nomination,[8] and also won the 1982 W. C. Handy Award for Best Blues Album of the Year.[9] Wallace's backup group on were pianist Jim Dapogny's Chicago Jazz Band, consisting of cornetist Paul Klinger, trombonist Bob Smith and Russ Whitman and Peter Ferran on reeds.

On July 22, 1982 at the Montreux Jazz Festival, Sippie shared the stage with the King of the Blues, B.B. King, which was filmed and later broadcast.

Then in Ann Arbor, Michigan she got together with German boogie woogie pianist Axel Zwingenberger, with whom she recorded a studio album in 1983. Wallace included many of her own groundbreaking compositions as well as other classic blues songs, on his album, And the Friends of Boogie, Vol. 1: Sippie Wallace, released in 1984. In 1984 she traveled to Germany to tour with Zwingenberger, where they also recorded the only complete live album she ever did: An Evening With Sippie Wallace for Vagabond Records.

In March 1986, following a concert in Germany at Burghausen Jazz Festival, she suffered a severe stroke, was hospitalized, returned to the US, and died on her 88th birthday at Sinai Hospital in Detroit, Michigan.[11] She is buried at Trinity Cemetery, Detroit, Wayne County, Michigan.[12]

In 1986, Rhapsody Films and producer Roberta Grossman released Sippie Wallace: Blues Singer and Song Writer, a documentary about Sippie Wallace, who is represented in this film portrait by means of concert footage, interviews, historic rare recordings and photographs.[13]

This article uses material from the article Sippie Wallace from the free encyclopedia Wikipedia and it is licensed under the GNU Free Documentation License.