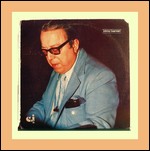 Guarnieri joined the George Hall orchestra in 1937.[1] He is perhaps best known for his big band stints with Benny Goodman in 1939 and with Artie Shaw in 1940. Guarnieri is also noted for his embellishment and juxtaposition of jazz with classical piano, such as Scarlatti and Beethoven.

Throughout the 1940s Guarnieri was a busy sideman, recording with artists such as Charlie Christian, Cozy Cole, Ike Quebec, Charlie Kennedy, Hank D'Amico and Ben Webster. He also led his own group called the "Johnny Guarnieri Swing Men" and recorded with them on the Savoy label, a group that included Lester Young, Hank D'Amico, Billy Butterfield and Cozy Cole. He also led a trio in the 1940s composed of himself, Slam Stewart and Sammy Weiss, recording again for Savoy. During the 1940s he also recorded for the short-lived Majestic label, playing solo piano and with his trio.

In the 1940s he also played harpsichord in the Gramercy Five, a small band led by Artie Shaw; his solos were the first recorded on that instrument in jazz.[1]

Guarnieri was based in Los Angeles later in his life, but traveled to the East Coast to play a concert in January 1985.[1] He played at the Vineyard Theatre at East 26th Street in New York City on January 6, but had to stop at the intermission because of dizziness.[1] He went to a friend's house to rest, but was admitted to St Barnabas hospital in Livingston, New Jersey the following day, where he died following a heart attack.[1]

He was survived by his wife, Jeanne, six children, and 18 grandchildren.[1]

With the Henri René Orchestra

This article uses material from the article Johnny Guarnieri from the free encyclopedia Wikipedia and it is licensed under the GNU Free Documentation License.

I Want A Little Girl Oscar Klein Quartet
Update Required To play the media you will need to either update your browser to a recent version or update your Flash plugin.