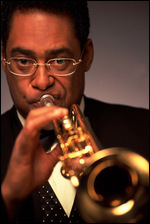 Jon Faddis (born July 24, 1953) is an American jazz trumpet player, conductor, composer, and educator, renowned for both his playing and for his expertise in the field of music education. Upon his first appearance on the scene, he became known for his ability to closely mirror the sound of trumpet icon Dizzy Gillespie, who was his mentor along with pianist Stan Kenton and trumpeter Bill Catalano.

Jon Faddis was born in Oakland, California, in 1953. At 18, he joined Lionel Hampton's big band before joining the Thad Jones/Mel Lewis Orchestra as lead trumpet. After playing with Charles Mingus in his early twenties, Faddis became a noted studio musician in New York City, appearing on many pop recordings in the late 1970s and early 1980s.

One such recording was "Disco Inferno" with the Players Association in which he plays trumpet recorded in 1977 on the LP "Born to Dance". In the mid-1980s, he left the studios to continue to pursue his solo career, which resulted in albums such as Legacy, Into the Faddisphere and Hornucopia.

As a result of his growth as a musician and individual artist, he became the director and main trumpet soloist of the Dizzy Gillespie 70th Birthday Big Band and Dizzy's United Nation Orchestra.

From 1992 to 2002, Faddis led the Carnegie Hall Jazz Band (CHJB) at Carnegie Hall, conducting more than 40 concerts in ten years, during which time the CHJB presented over 135 musicians, featured over 70 guest artists, and premiered works by over 35 composers and arrangers at Carnegie Hall.

Faddis also led the Dizzy Gillespie Alumni All-Stars and the Dizzy Gillespie Alumni All-Stars Big Band from their inception through 2004, when he was appointed artistic director of the Chicago Jazz Ensemble (CJE), based at Columbia College Chicago in Illinois. Faddis led the CJE from autumn 2004 though spring 2010, premiering significant new works, pioneering educational initiatives in Chicago public schools focusing on Louis Armstrong's music, and bringing the CJE into new venues (including presenting the first of the "Made in Chicago" Jazz series at the Pritzker Pavilion in Millennium Park), while concurrently leading the Jon Faddis Jazz Orchestra of New York (the successor to the Carnegie Hall Jazz Band).

As of May 2010, Faddis leads the JFJONY, while continuing also to lead the Jon Faddis Quartet and the JFQ+2. The JFJONY headlined The Kennedy Center's New Year's Eve performance in December 2010 (available as a podcast on NPR's JazzSet); the JFJONY has also performed at the Kimmel Center in Philadelphia, the Performing Arts Center in Westchester, New York, the Newport Jazz Festival and other venues.

In 1999, Faddis released the Grammy-nominated Remembrances (Chesky Records), which was composed almost entirely of ballads and featured work from Argentinian composer/arranger Carlos Franzetti.

In 1997, Faddis composed the jazz opera Lulu Noire, which was presented at USA in Charleston, South Carolina, as well as at the American Music Theater Festival in Philadelphia.

Faddis appeared in the 1998 movie Blues Brothers 2000. In the film, he plays trumpet with The Louisiana Gator Boys. Faddis is also a noted educator for jazz and the trumpet.

For over a decade, Faddis has taught – and continues to teach – at The Conservatory of Music at Purchase College-SUNY, in Westchester, New York, where he teaches trumpet, classes, and an ensemble. Remaining true to the tradition of honoring mentors, he also leads master classes, clinics and workshops around the world; he often will bring promising students along to his gigs and allow the students to sit in, and also has produced a number of CDs for up-and-coming musicians.

In July 2011 he played a tribute to Miles Davis at the Prague Castle, hosted by the Czech President, Václav Klaus, accompanied by Lenny White on drums, Jaroslav Jakubovič on baritone saxophone, Tom Barney on bass and Emil Viklický on piano.[1]

Faddis has been a resident of Teaneck, New Jersey.[2]

Faddis is the uncle of Madlib and Oh No, acclaimed hip-hop producers.[3]

As Music Director for the Dizzy Gillespie Alumni All-Stars

This article uses material from the article Jon Faddis from the free encyclopedia Wikipedia and it is licensed under the GNU Free Documentation License.