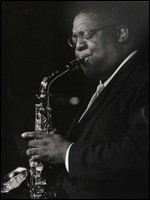 Jesse Davis (born November 9, 1965) is an American jazz saxophonist. Davis began as a student in Ellis Marsalis's New Orleans Center for Creative Arts.[1] After graduating, Jesse Davis embarked on a productive jazz career, recording 8 albums on the Concord Jazz label, alongside collaborations with such artists as Jack McDuff and Illinois Jacquet. Davis has studied music at Northeastern Illinois University,[1] and in 1989 he received a "Most Outstanding Musician award" from Down Beat magazine.[2]

This article uses material from the article Jesse Davis from the free encyclopedia Wikipedia and it is licensed under the GNU Free Documentation License.

Tonight Oscar Peterson Trio
Update Required To play the media you will need to either update your browser to a recent version or update your Flash plugin.