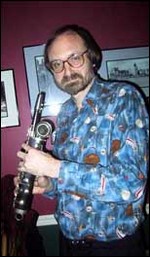 Scott Robinson (born April 27, 1959 in New Jersey) is an American jazz musician. Robinson is best known for his work with various styles of saxophone, but has also performed with the clarinet, flute, trumpet, and sarrusophone, along with other, more obscure instruments.

The son of a piano teacher and an editor for the magazine National Geographic,[1] Robinson graduated from the Berklee College of Music in 1981. The next year, he joined the college's staff, becoming its youngest faculty member.[2]

Robinson has appeared on more than 200 LP and CD releases, including eleven under his leadership,[3] with musicians such as Lionel Hampton,[2] Anthony Braxton, John Scofield, Joe Lovano, Ella Fitzgerald, Paquito D'Rivera, Sting, Maria Schneider, Elton John,[3] Buck Clayton, and the New York City Opera.[1] Two of these recordings won a Grammy Award.[3] He has also received four fellowships from the National Endowment for the Arts.[1]

Throughout his career, Robinson has worked to keep unusual and obscure instruments in the public view. For example, he has recorded an album featuring the C-melody saxophone and performs with the ophicleide. He also owns and records with a vintage contrabass saxophone, so rare that fewer than twenty in playable condition are known to exist.[3]

Robinson is a resident of Teaneck, New Jersey.[4] He is married to Sharon Robinson.

Since 2009, he has operated his own record label, ScienSonic Laboratories, whose releases include three of his most recent recordings, including the 2012 Scott Robinson Doctette release Bronze Nemesis, on the ScienSonic sub-imprint Doc-tone.

This article uses material from the article Scott Robinson (jazz musician) from the free encyclopedia Wikipedia and it is licensed under the GNU Free Documentation License.

One More Blues For Chet Julian & Roman Wasserfuhr Quartet
Update Required To play the media you will need to either update your browser to a recent version or update your Flash plugin.