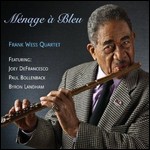 Frank Wellington Wess (January 4, 1922 – October 30, 2013) was an American jazz saxophonist and flautist. In addition to his extensive solo work, Wess is remembered for his time in Count Basie's band from the early 1950s into the 1960s. Critic Scott Yannow described him as one of the premier proteges of Lester Young, and a leading jazz flautist of his era—using the latter instrument to bring new colors to Basie's music.[1]

Wess was born in Kansas City, Missouri, the son of a principal father and a schoolteacher mother. He began with classical music training and played in Oklahoma in high school. He later switched to jazz on moving to Washington, D. C. and by nineteen was working with big bands. His career was interrupted by World War II although he did play with a military band in the period. After leaving the military, he joined Billy Eckstine's orchestra.[2] He returned to Washington D.C. a few years afterwards and received a degree in flute at the city's Modern School of Music. He played tenor sax with Count Basie from 1953 to 1964, doubling on flute.

Wess was considered one of the best jazz flautists of his time. From 1959 to 1964, he won the Down Beat magazine critics' poll for flute.

He was a member of Clark Terry's big band from 1967 into the 1970s and played in the New York Jazz Quartet (with Roland Hanna).[3] He also did a variety of work for TV.[4] In 1968 he contributed to the album The Jazz Composer's Orchestra. He played tenor and alto sax, doubling on flute throughout his career.

With the New York Jazz Quartet

This article uses material from the article Frank Wess from the free encyclopedia Wikipedia and it is licensed under the GNU Free Documentation License.