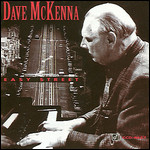 Dave McKenna (30 May 1930 – 18 October 2008, Woonsocket, Rhode Island[1]) was an American jazz pianist. Known primarily as a solo pianist and for his distinctive "three-handed" swing style, he was a significant figure in the evolution of jazz piano.

He worked with a variety of top swing and Dixieland musicians including Gene Krupa, Joe Venuti, Stan Getz, Zoot Sims, Al Cohn, Bob Wilbur, Eddie Condon, and Bobby Hackett but became primarily a soloist after 1967, especially in the Northeast United States. McKenna performed with Louis Armstrong at the 1970 Newport Jazz Festival. He was also known as a wonderful accompanist, recording with singers such as Rosemary Clooney, Teddi King and Donna Byrne, and recording a PBS special with Tony Bennett.

McKenna started to be recognized in his own right during the 1970s, but chose to play in his local area rather than travel extensively. He preferred playing in clubs and hotels over getting center stage in major venues. He could be found playing in hotel piano bars in Massachusetts, including a decade-long run at Boston's grand Copley Plaza Hotel that ended in 1991 when the Plaza was sold. The new owners briefly turned the Plaza Bar into a cabaret, but the new format was never as popular as McKenna and ended within a year. Unfortunately, the damage was done and, because McKenna was much in demand, he returned to the Plaza for only a single night.

Because of his fondness for staying close to the melody, McKenna often said, "I'm not really a bona fide jazz guy... I'm just a saloon piano player." Regulars at the Copley Plaza Bar (now the Oak Room) rebuffed this modest remark by telling McKenna he was "just a saloon player" like Billie Holiday was "just a saloon singer".

McKenna was a loyal Boston Red Sox fan who, to the amusement of fans and fellow musicians alike, would often listen to games on his transistor radio while performing. Since McKenna did not drive, he often told friends the best thing about staying at the Plaza six nights a week was being able to walk to his beloved Fenway Park.

McKenna retired around the turn of the millennium due to increasing mobility problems brought on by his long battle with diabetes. He died in 2008 from lung cancer. He was survived by his wife, Frances (Wiggins) McKenna (now deceased) of Oak Island, NC; his son Douglas of Cape Cod; and his son Stephen, daughter-in-law Hiya, and granddaughter Caitlin, all of PA. He also leaves a brother, Donald, and two sisters, Jean O’Donnell and Patricia Savard, all of RI. Red Sox radio announcer Joe Castiglione took time on-air during a game to say a few words about the passing of one of Boston's great, largely unsung talents.

McKenna's musical style relied on two key elements relating to his choices of tunes and set selection, and the method of playing that has come to be known as "three-handed swing".

McKenna liked to make thematic medleys, usually based around a key word that appeared in the titles, such as teach, love, women's names, dreams, night or day, street names, etc. He often combined ballads and up-tempo songs with standards, pop tunes, blues, and even TV themes or folk material.

McKenna's renditions usually began with a spare, open statement of the melody, or, on ballads, a freely played, richly harmonized one. He often stated the theme a second time, gradually bringing more harmony or a stronger pulse into play.

The improvisation then began in earnest on three levels simultaneously: a walking bassline, midrange chords and an improvised melody. The bassline, for which McKenna frequently employed the rarely used lowest regions of the piano, was naturally played in the left hand, often non-legato, to simulate an actual double bassist's phrasing. The chords were played using the thumb and forefinger of the right hand or of both hands combined, if the bass was not too low to make the stretch unfeasible. Sometimes he also added a guide-tone line consisting of thirds and sevenths on top of the bass, played by the thumb of the left hand. With his right hand's remaining fingers, he then played the melody, weaving it into improvised lines featuring colorful chromaticism, blues licks, and mainstream-jazz ideas. The result was the sound of a three-piece band under one person's creative control.

McKenna often used his left hand to emulate the sound of a rhythm jazz guitarist, playing a four-to-the-bar "strum" consisting of a bass note (root/fifth/other interval), third, and seventh. This pattern often took the form of intervals of a tenth, which is why the voicings were frequently "broken" arpeggiated, with the top two notes being played on the beat and the bass note slightly before. He often subtly altered these voicings every two beats for variety.

McKenna's "broken tenth" sound was frequently mistaken for stride piano. However, it was a more modern four-beat style, as opposed to stride's two-beat "oom-pah" rhythm (ala Fats Waller). McKenna was also quite capable of playing full stride piano, and occasionally broke into stride choruses, especially on songs associated with traditional jazz or at the height of an up-tempo song's development.

The characteristic that perhaps most distinguishes McKenna's playing is his sense of time. One of the biggest challenges of solo jazz piano is the need to provide a compelling time feel, in part by emulating the rhythmic landscape normally provided by three or four players in a small group. By conceiving multiple "parts" and playing them with distinct volume levels and time feels (often with right hand chords ahead of the beat and the melody behind the beat), McKenna had a unique ability to reproduce, on his own, the sound of a small group.

Despite his complex, multi-tiered approach, McKenna's playing was always a model of clarity, taste, beauty, and swing. Some musician friends called him "The Bell Ringer" for the clear, bell-like sound he evoked from the instrument.

His recordings on the Concord record label attest to both the excitement and tenderness of his playing. His contribution to the evolution of jazz will not be forgotten, as he has inspired and influenced countless jazz musicians with his taste, imagination, and incomparably "holistic" approach to the keyboard. Art Tatum, often considered the greatest soloist in jazz piano history, praised McKenna as "a complete musician".

McKenna had an extensive recording career from 1958 to 2002, and recorded for ABC-Paramount Records (1956), Epic (1958), Bethlehem (1960) and Realm (1963). He made several recordings for Chiaroscuro Records in the 1970s, including his comeback album Solo Piano. He debuted with the Concord Jazz label in 1979, where the majority of his catalogue rests, including one volume of Concord's 42-disc series recorded live at Maybeck Recital Hall. McKenna's last recording, "An Intimate Evening With Dave McKenna," was released on Arbors Records in 2002.

Having sat alongside Dave, many, many nights, as he played at The Copley Plaza Hotel in Boston from '80-'82, he was clearly a GIANT at the Piano As a young Chef, who worked only a couple blocks away in "Back Bay", would go directly to the Copley Plaza Hotel to unwind, several nights per week, after work, month after month, by listening to Dave as he "tickled the "Ivories & Ebonies" with his "Three" hands, while I enjoyed a glass(or 2) of Port or Single Malt! My father was a Piano Player/Singer & we lived in the hometown of piano great Art Tatum; plus I had previously been a Professional Musician & Radio DJ, so believe am qualified to say that all of the above is true. However, would like to add that he was also an extremely beautiful human being who was a better listener & commentator than most Bartenders or Psychologists! Furthermore, he could listen, speak & play simultaneously with absolute seamless perfection! Which I think speaks volumes in itself! This Man has to be one of the greatest of all time! Easily in the Top Ten & likely in the Top Five or Three, even! Have virtually ALL the greatest players in my extensive collection of recordings & have seen "Live" most who performed between 1965 to 2012. Thanks for the memories, Dave! Will never forget all those nights at the "CPH"!!!

This article uses material from the article Dave McKenna from the free encyclopedia Wikipedia and it is licensed under the GNU Free Documentation License.