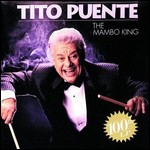 Ernesto Antonio "Tito" Puente (April 20, 1923 – May 31, 2000)[1] was an American musician, songwriter and record producer. The son of Ernest and Ercilia Puente, native Puerto Ricans living in New York City's Spanish Harlem, Puente is often credited as "The Musical Pope", "El Rey de los Timbales" (The King of the Timbales) and "The King of Latin Music". He is best known for dance-oriented mambo and Latin jazz compositions that endured over a 50-year career. He and his music appear in many films such as The Mambo Kings and Fernando Trueba's Calle 54. He guest-starred on several television shows, including Sesame Street and The Simpsons two-part episode "Who Shot Mr. Burns?".

Tito Puente was born on April 20, 1923, at Harlem Hospital Center in the New York borough of Manhattan.[2][3] His family moved frequently, but he spent the majority of his childhood in the Spanish Harlem area of the city.[2] Puente's father was the foreman at a razorblade factory.[4]

As a child, he was described as hyperactive, and after neighbors complained of hearing seven-year-old Puente beating on pots and window frames, his mother sent him to 25-cent piano lessons.[4] By the age of 10, he switched to percussion, drawing influence from jazz drummer Gene Krupa.[4] He later created a song-and-dance duo with his sister Anna in the 1930s and intended to become a dancer, but an ankle tendon injury prevented him pursuing dance as a career.[3][4] When the drummer in Machito's band was drafted to the army, Puente subsequently took his place.[4]

Puente served in the Navy for three years during World War II after being drafted in 1942. He was discharged with a Presidential Unit Citation for serving in nine battles on the escort carrier USS Santee (CVE-29). The GI Bill allowed him to study music at Juilliard School of Music, where he completed a formal education in conducting, orchestration and theory. In 1969, he received the key to the City of New York from former Mayor John Lindsay. In 1992, he was inducted into the National Congressional Record, and in 1993 he received the James Smithson Bicentennial Medal from the Smithsonian.[5]

We play jazz with the Latin touch, that's all, you know.[6]

During the 1950s, Puente was at the height of his popularity, and helped to bring Afro-Cuban and Caribbean sounds like mambo, son, and cha-cha-chá, to mainstream audiences. Puente was so successful playing popular Afro-Cuban rhythms that many people mistakenly identify him as Cuban. Dance Mania, possibly Puente's most well known album, was released in 1958.

Among his most famous compositions are mambo "Oye como va" (1963), popularized by Carlos Santana and later interpreted, among others, by Julio Iglesias, Irakere or Celia Cruz.

[7] Later, he moved into more diverse sounds, including pop music, bossa nova and others, eventually settling down with a fusion of Afro-Cuban and Latin jazz. In 1979, Puente won the first of five Grammy Awards for the albums A Tribute to Benny Moré, On Broadway, Mambo Diablo, and Goza Mi Timbal.

In 1990, Puente was awarded the James Smithson Bicentennial Medal. He was also awarded a Grammy at the first Latin Grammy Awards, winning Best Traditional Tropical Album for Mambo Birdland. In 1995, he appeared as himself on the Simpsons episode "Who Shot Mr. Burns?"

In early 2000, he appeared in the music documentary Calle 54, wearing an all-white outfit with his band.[8] After a show in Puerto Rico on May 31, 2000, he suffered a massive heart attack and was flown to New York City for surgery to repair a heart valve, but complications developed and he died on May 31, 2000.[9] He was posthumously awarded the Grammy Lifetime Achievement Award in 2003.

Tito Puente's name is often mentioned in a television production called La Epoca,[10] a film about the Palladium era in New York, Afro-Cuban music and rhythms, mambo and salsa as dances and music and much more. The film discusses many of Puente's, as well as Arsenio Rodríguez's, contributions, and features interviews with some of the musicians Puente recorded with such as Alfonso "El Panameno" Joseph, Luis Mangual, Julian Lianos and others.

Puente's son Richard "Richie" Puente[11] was the percussionist in the 1970s funk band Foxy. Puente's youngest son, Tito Puente Jr., has continued his father's legacy by presenting many of the same songs in his performances and recordings, while daughter Audrey Puente is a television meteorologist for WNYW and WWOR-TV in New York City. Puente's granddaughter, Janeen Puente, is a singer and bandleader.

Puente appeared in the two part whodunnit drama "Who Shot Mr. Burns?" in the sixth season of American comedy cartoon show, "The Simpsons", during 1995.

In the shows, Puente joins Springfield Elementary School as a music teacher after the school discovers it is located over an oil well. However, Mr. Burns manages to pump the oil first which makes him the legal owner of the well. This causes the school to fall into debt with budget cuts required to the music and maintenance departments, causing Puente to lose his job. When Burns is later shot, Puente becomes one of the prime suspects but manages to clear himself by performing one of his songs for Chief Wiggum.

This article uses material from the article Tito Puente from the free encyclopedia Wikipedia and it is licensed under the GNU Free Documentation License.

I Hear My Phone Ringing Norbert Egger & Natural Blues
Update Required To play the media you will need to either update your browser to a recent version or update your Flash plugin.